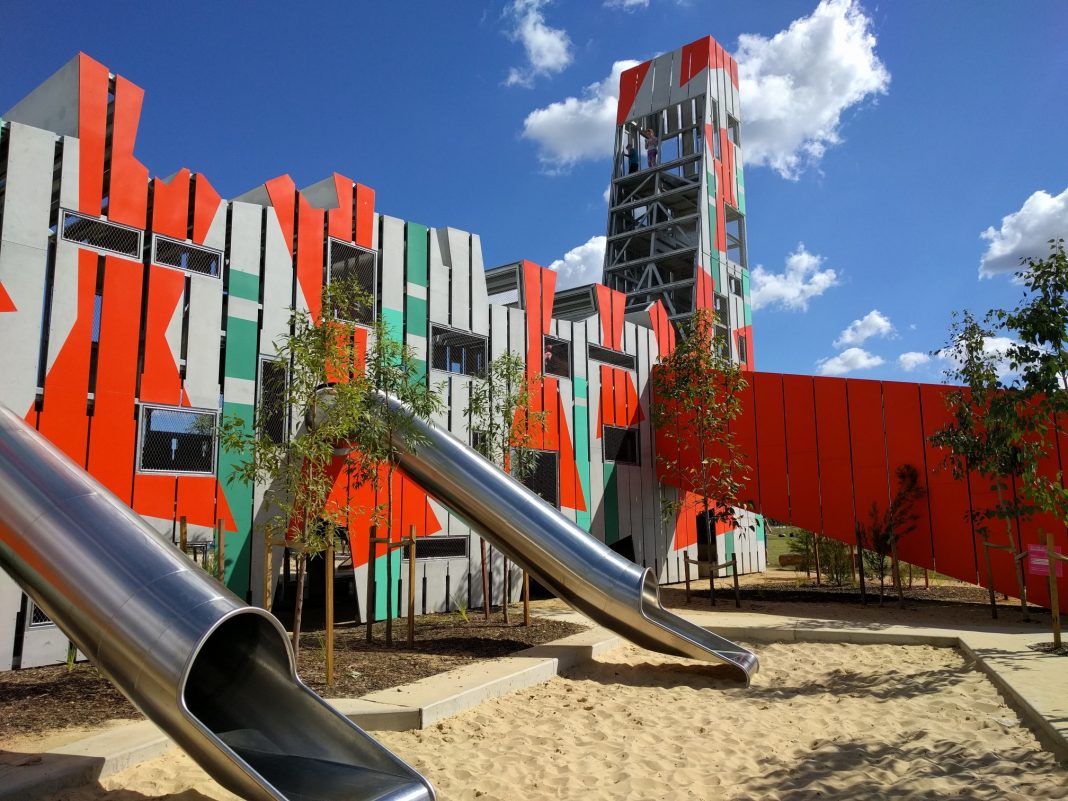 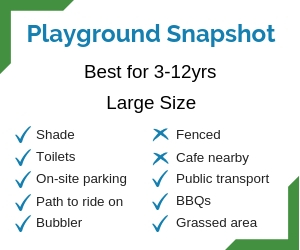 Oh boy we have lots of fun when visiting the playground at Bungarribee Park.

To be honest, my expectations weren’t that high when we first went back in April 2017. There had been so much hype in the lead up to the opening of Bungarribee Park in March 2017, that I wasn’t sure it would live up to it. But we were really impressed and we all left with BIG smiles on our faces. And it has been the same every time we’ve visited since! 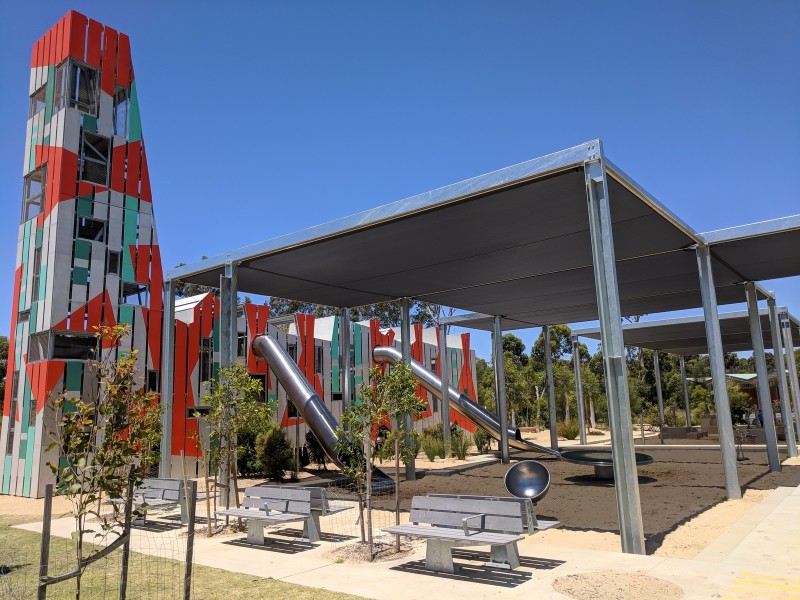 Unfortunately with little shade when it first opened, we kept our visits to cloudy, cooler days. But that all changed in November when shade sails were installed – YAY! And we can now visit whenever we want. We play tested the new shade on a hot sunny day in early December 2018 and they worked a treat! The temperature difference was significant and we happily played for hours. 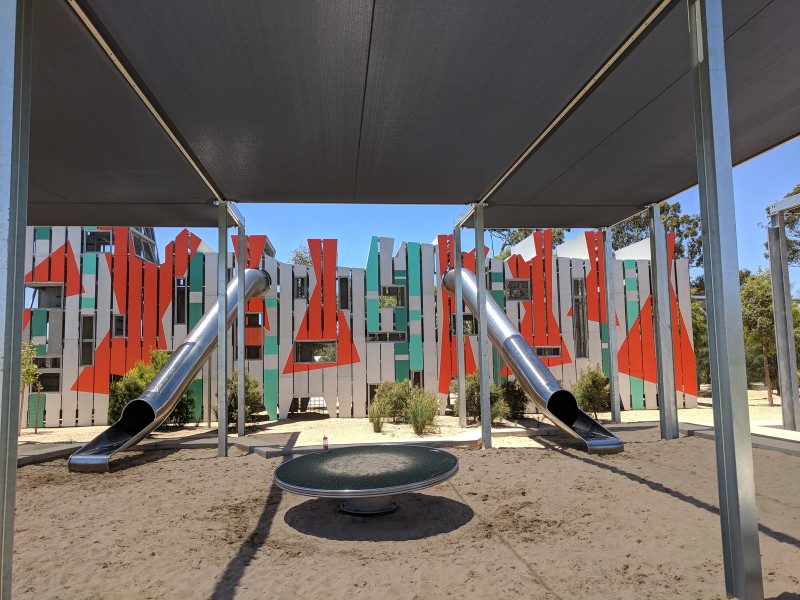 Western Sydney Parklands has been working on a number of improvements to Bungarribee Park, including:

On our first visit, I didn’t think my two preschoolers were ever going to leave the water play area. But then we climbed the tower and I thought I was going to have to do that a few times – well we did actually! They also gave the swings and flying fox a good go before we had to leave after two hours of non-stop fun. And it’s pretty much been the same experience each time we’ve visited.

There are five play areas within the playground at Bungarribee Park, with a bit of something for most kids.

The water play area is right near the main entrance and toilet block. So yes, bring a change of clothes! The area is now shaded – and it was a lot cooler under the shade than out in the sun when we visited recently. There are plenty of water pumps for the kids to ‘share’, plus channels carved in sandstone blocks and lots of sand. It’s great seeing how engrossed the kids get with making channels, digging and pumping.

2The Tower and Slides

You can’t miss the brightly coloured, geometrically shaped and kid enticing tower! At 14m high, it definitely stands out! And it’s a climbers paradise. Inside, there is a number of passage ways, ledges to climb, ropes, viewing windows and slides to get back down.

There is mesh on any opening on the walls, so you don’t have to worry about the kids falling out. These mesh walls also make for nice outlook spots to the playground and picnic areas below.

My 4yr easily scaled the tower by himself. And I only had to help my 2.5yr once or twice to get up a high ledge….though I suspect that they are there to stop the little ones from climbing to the top without adult assistance.

There are two slides on the front and two smaller ones on the back. Now with the shade over the front two slides, they won’t get as hot. But the back ones will still be mini ovens in summer… until the newly planted trees provide much needed shade in time. 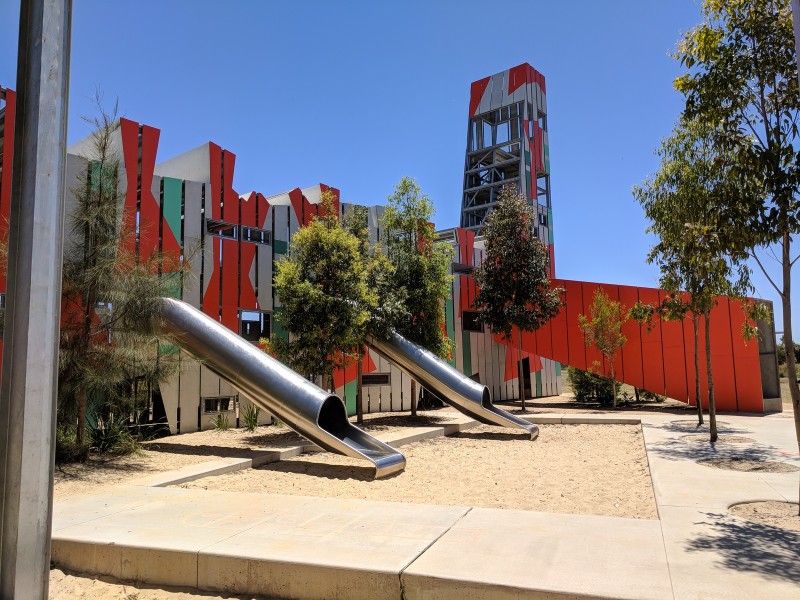 And parents, watch your head when climbing the tower and moving around inside. I managed to knock myself a few times. But there are very bright orange strips now that help.

There are two ‘sets’ of swings, both now with the same shade as over the water play area. The swings for younger kids are behind the tower, near the water and sand play area. 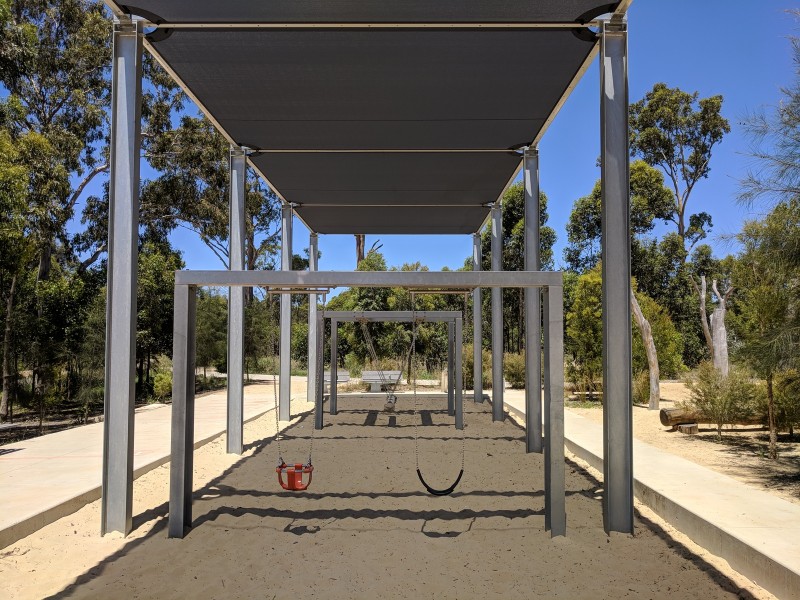 There is a rope rocking swing there as well which the kids can stand on. Then there are a set of 8 giant swings between the tower and flying fox. 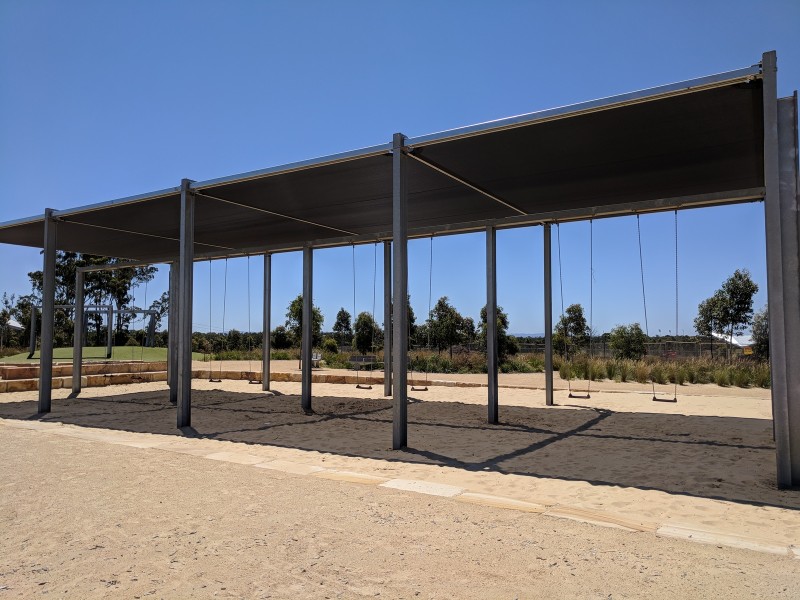 And these swings are fun for adults to and so easy to swing.

The 50m long, dual flying fox is a whole lot of fun for kids and adults. 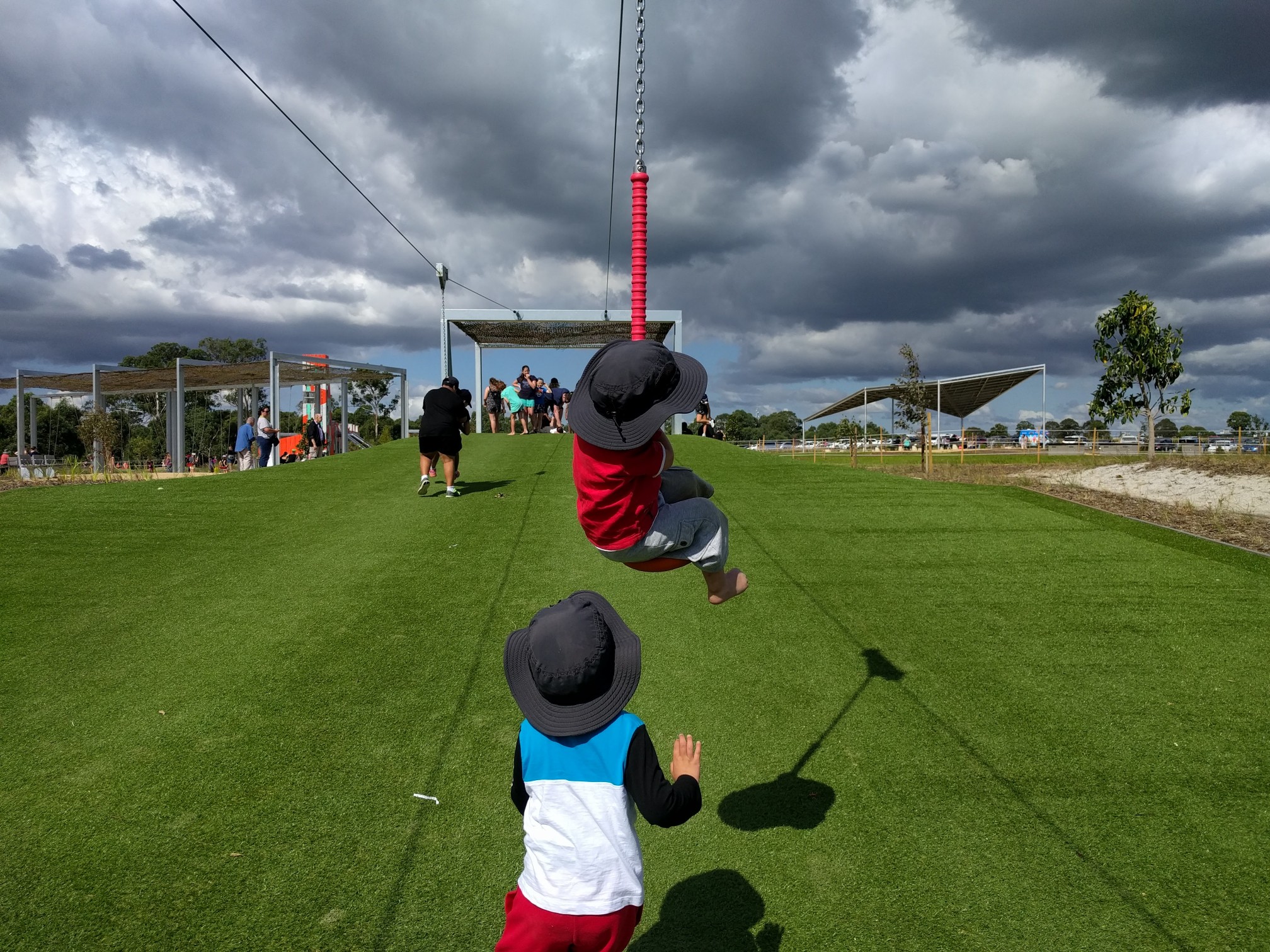 My adventurous 2.5yr had a go with me running along with him and his brother pushing him back up.

In front of the tower, there is a spinning chair plus a merry-go-round that is more like a flat spinning top. 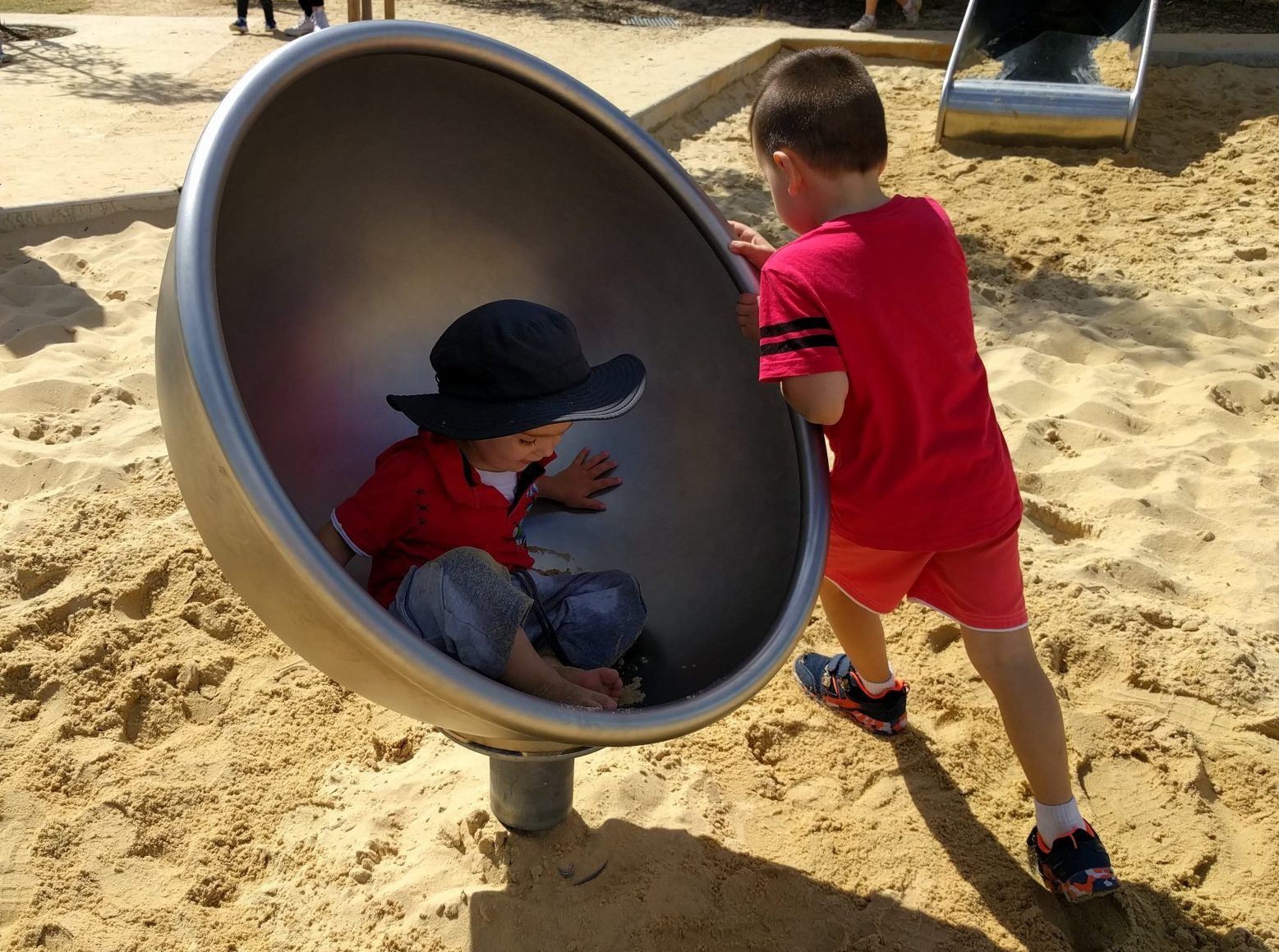 With 200 hectares of recreational parkland, there is a lot of space to spread out. We haven’t yet explore much beyond the playground, which has picnic shelters and BBQs. But know there are cycleways and a dog off the leash area in Bungarribee Park.

The toilet block is next to the carpark for the playground and it seemed to only have one baby change toilet. There are bubblers around, as well as the hand washing station in the centre of the toilet block.

While shade sails have been installed over most of the play equipment, and there are more picnic shelters being built, there still isn’t much shade to sit under at the moment. There are though plenty of trees that will provide shade in a few years. So for now, remember to bring something like a beach tent or portable gazebo and hats on a sunny day.

Soon your kids are going to have some competition for making the loudest (animal) noise at Bungarribee Park, with Sydney Zoo set to open in early 2019. As you can see from the map below, there will be a LOT of animals to visit and get to know, including a:

Construction is already well underway on building Sydney Zoo, just on the other side of the playground car park! And the top of the tower is definitely the best spot to watch Sydney Zoo coming alive.

So Bungarribee Park is also a great spot for any construction loving kids at the moment! 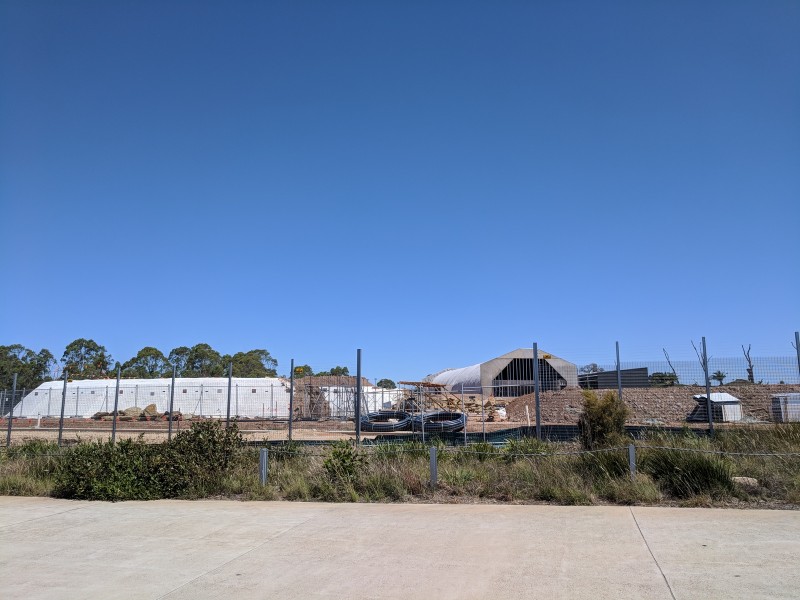 There is pedestrian access all the time and gates open to cars at 8am every day. Closing times vary depending on the time of year:

The new Bungarribee Park is located near the intersection of the M4 and M7 and about 15kms west of Parramatta. At the moment, there isn’t much signage at the entrance – intersection of Doonside and Holbeche Roads – or once you get inside. For the playground, just go around to the left (see map above).

There is lots of free on-site parking, though the car park would get full pretty quickly on a busy day.

From Parramatta, you can catch a train to Blacktown and then either the 729 or 724 bus to the front of Bungarribee Park on Doonside Road.

Soon this fantastic playground won’t be the only thing you’ll visit at Bungarribee Park, with Sydney Zoo set to open in early 2019!

Other places of interest nearby include: 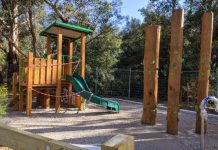 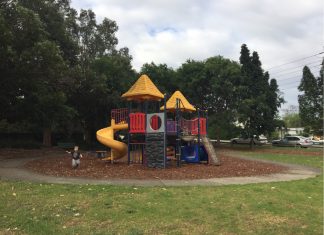 ABOUT US
ParraParents is full of handy local information to make life a little easier for parents in the Parramatta district and surrounding areas. It is written by parents for parents and hopefully helps you create some fond family memories. ParraParents is an extension of the Parramatta District Mums Facebook group.
Contact us: [email protected]nts.com.au
FOLLOW US
© ParraParents
Do NOT follow this link or you will be banned from the site!
MORE STORIES