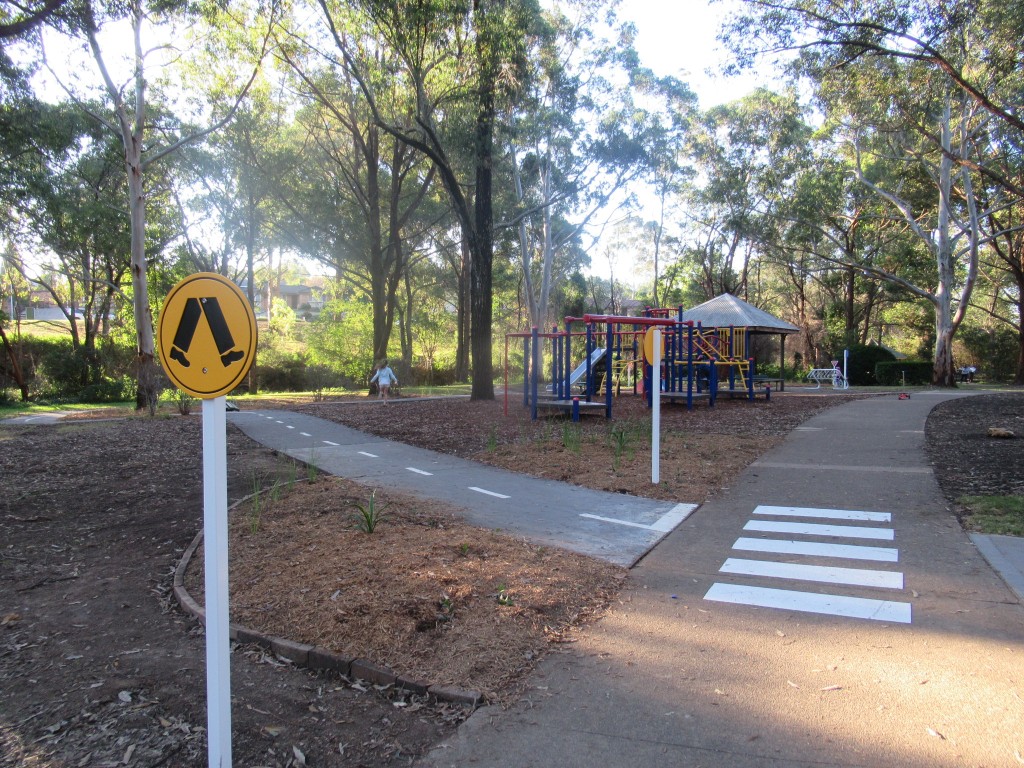 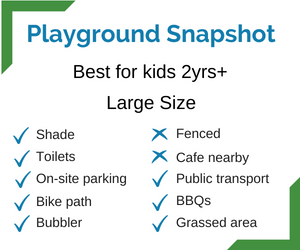 We headed out to Crestwood Reserve to see how the new scooter track was progressing. I thought it would be a good way to spend the afternoon after being stuck indoors with sick kids, now that our home ‘quarantine’ period had ended. And the kids were over the moon to find it finished! They loved scootering around and around and around, with pit stops at the playground in the middle. 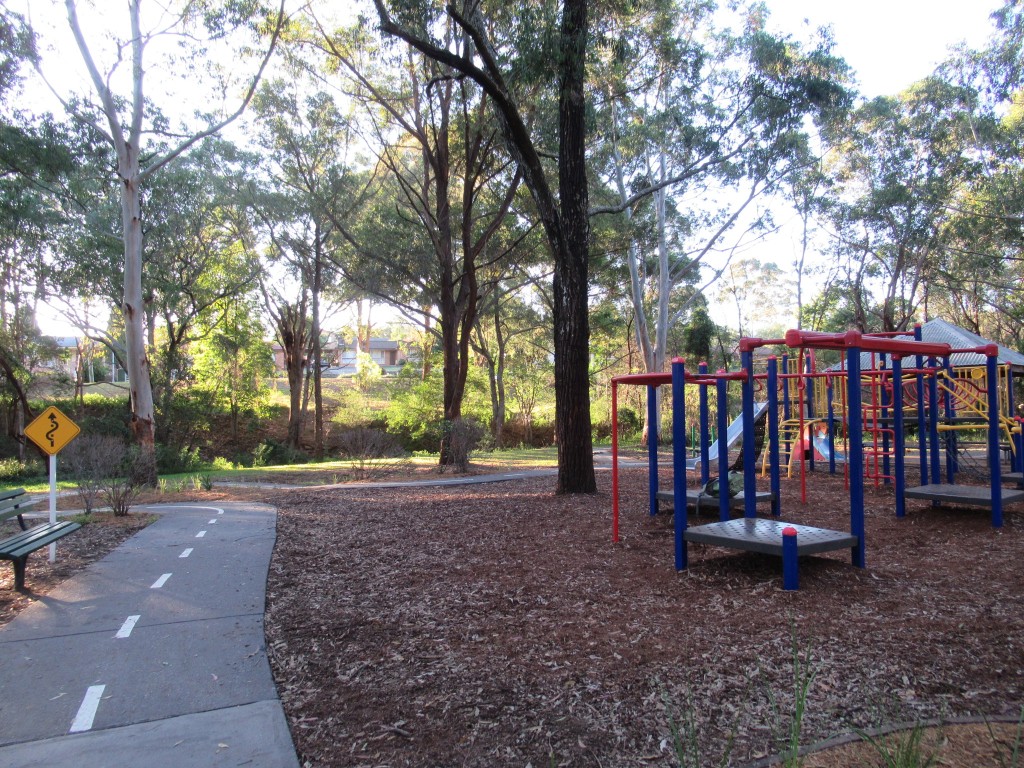 Crestwood Reserve is a very large bushy park. I didn’t realise how large until we went looking for the new learn to ride track today. We have been a few times before but only ever played at the main playground in the middle of the reserve, near the tennis courts.

Within Crestwood Reserve you will find two playgrounds, tennis courts, netball courts, community hall where there is a playgroup, sports fields, fenced dog-off leash area, small skate park, picnic tables, bbqs and toilets. Plus of course the new learn to ride scooter/ bike track that opened late June 2018. And there is also a creek running through parts of the reserve, a few bridges to cross and lots of bush for some nature play.

With lots of shade over the playgrounds, Crestwood Reserve is particularly good to visit in the warmer months. It just needs some water play!

The new scooter/ bike track goes around the smaller playground at the southern end of Crestwood Reserve, near the intersection of Chapel Lane and Leumeah Ave.

We parked where we usually do behind the tennis courts and then set off south. Thankfully Crestwood Reserve has wide paths to walk and ride on that go all around the park, including down to the new scooter/ bike track. From the bottom of the main car park, you can either right or left as both paths will eventually get you there. But going right, down the little hill and over the creek is the most direct way. Along the way you will pass the small skate park and across over another bridge.

The first thing I noticed about the scooter/ bike track are all the lovely tall trees over it, which provide lots of shade. Then there are all the picnic shelters nearby and the dual BBQ right near the track. I can already see lots of summer evenings spent here, cooking on the BBQ while the kids ride around. 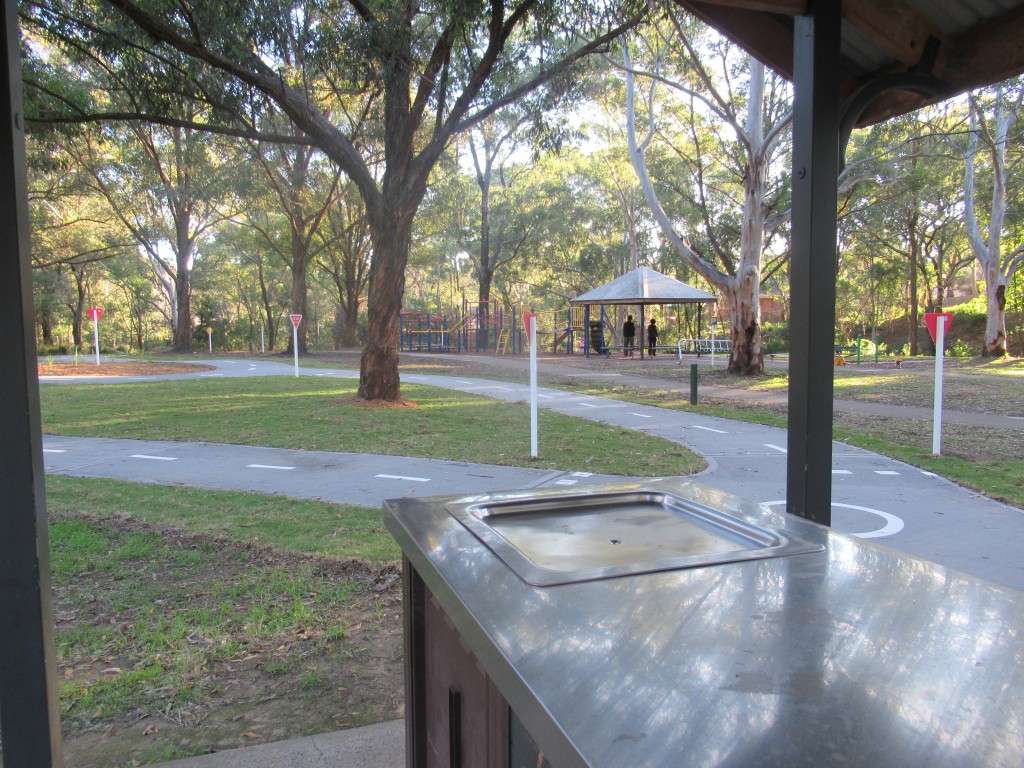 The scooter/ bike track itself is rather big and has a good length of track. There are paths intersecting, rounds abouts, road signs, zebra crossings and parking bay.

Sort of in the middle of the scooter/ bike track is a small playground with a bark ground. It’s great for preschoolers and young primary school kids who like to climb and swing like monkeys.

There is also some play equipment for little ones nearby, with a slide, small climbing wall and rockers. But you will need to watch them as the track goes right nearby. 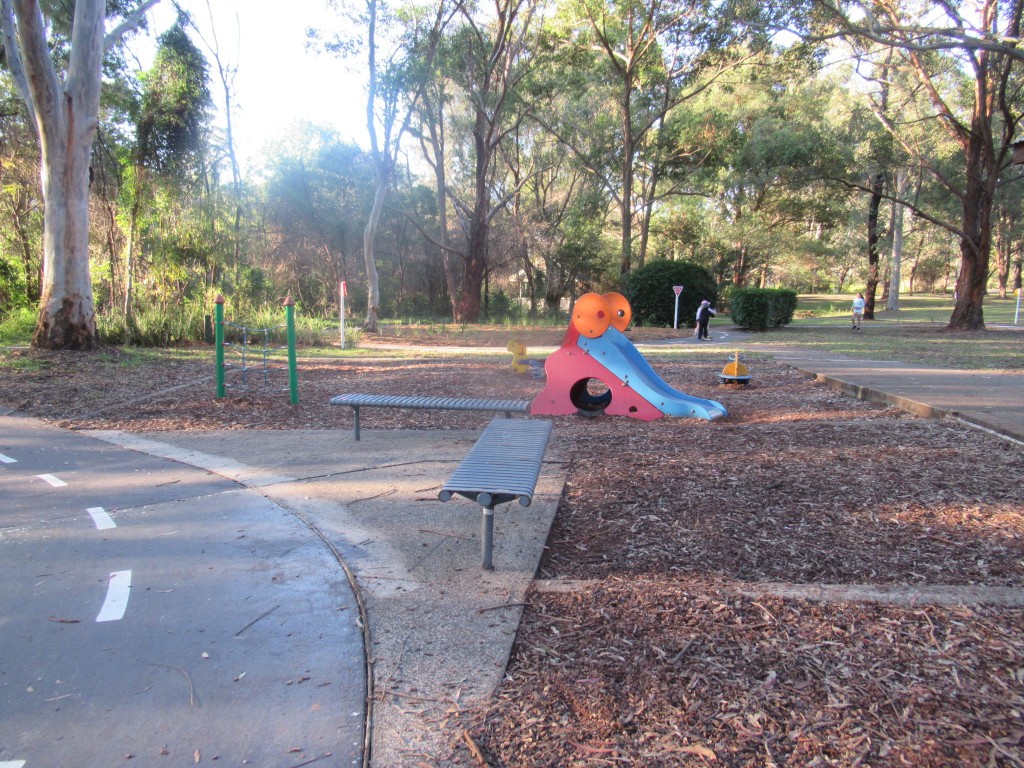 There are lots of seats along the track and the toilets are just a short walk way.

In the middle of Crestwood Reserve, you will find the main, medium sized playground. It’s well protected from the sun with three large shade sails over it. 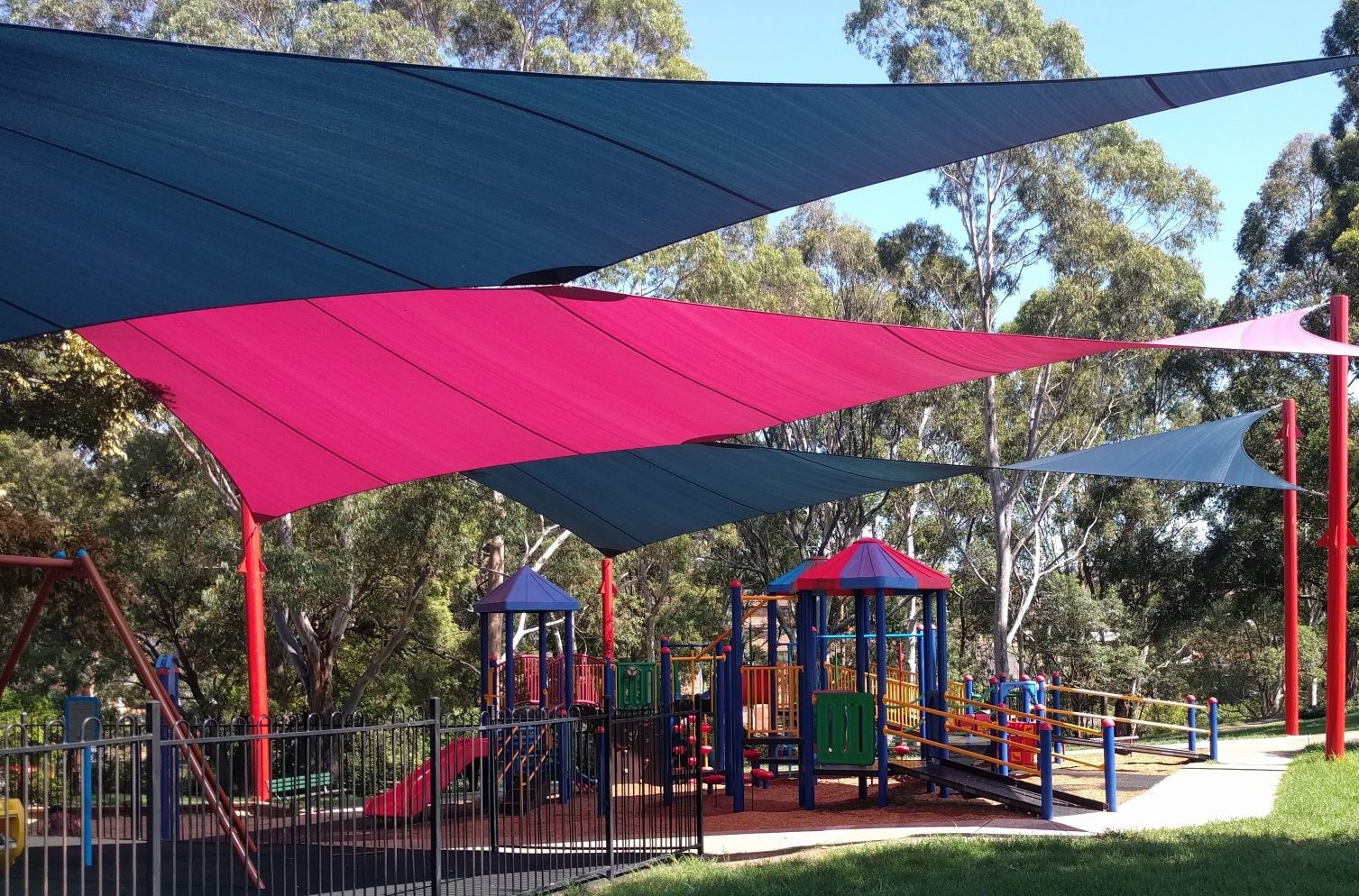 The centre piece of the main playground is a large, interconnected climbing play gym with a few cubby houses, slides, ramps and tunnels.

There is also a sand pit, liberty swing and a double swing set. 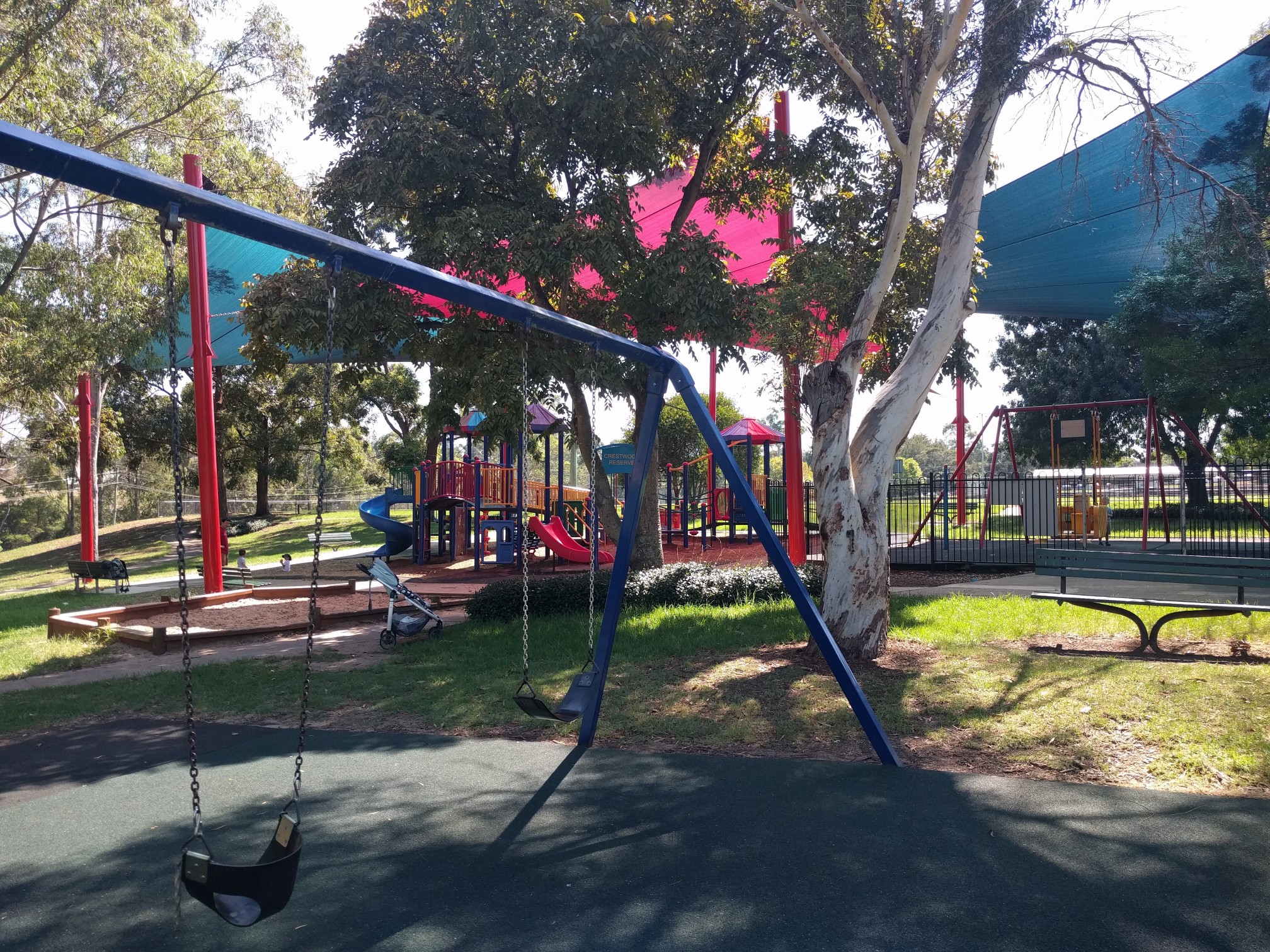 Next to the playground are picnic tables and a BBQ.

In addition to the two playgrounds and scooter/ bike track, you will find:

There is also street parking around the perimeter of the park. And you can get there by bus from Winston Hills or Seven Hills. 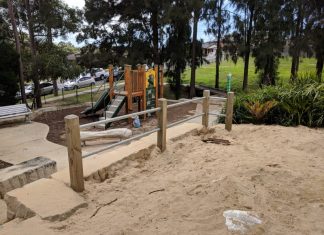