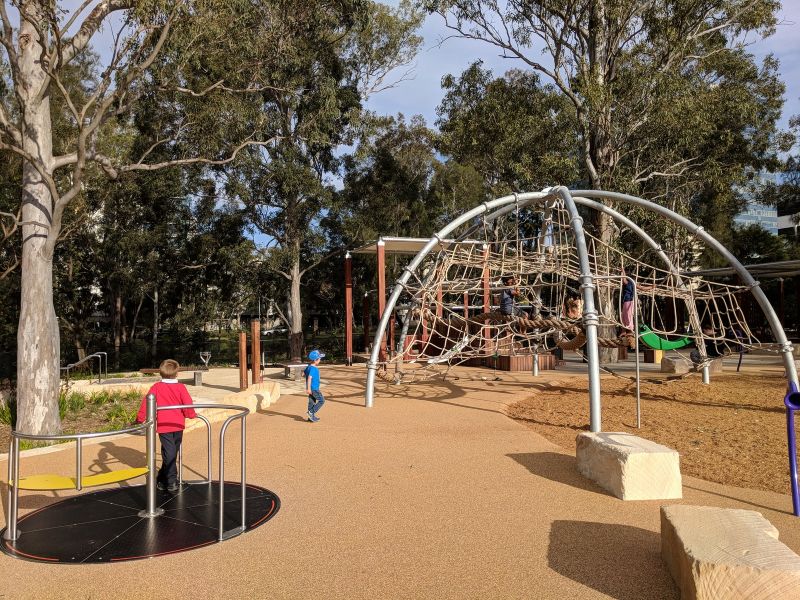 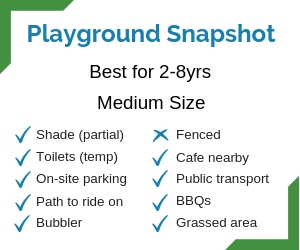 Paperbark Playground at Pavilion Flat is one of two playgrounds that call Parramatta Park home. And until recently, it was definitely the older, smaller and simpler playground of the two. But that’s changed, with Pavilion Flat now boasting a beautiful new inclusive playground for kids of all abilities.

And it makes for a good combined outing for families, with a pop-up cafe at the George Street Gatehouse nearby (Note: Grounds Keeper Cafe closed in May 2019). Plus, it’s a lovely spot for a picnic lunch. Or you can take a little walk to The Shed, Club Parramatta or other cafes in the Parramatta CBD nearby.

The new Paperbark Playground at Pavilion Flat was built thanks to $1.5million funding from the NSW Government, as part of the important Everyone Can Play Initiative. It was officially opened on 25th July 2019. We’re very grateful to have been consulted on the design of the playground, getting a scooter/ bike track added and joey swing included. And to have been involved in the naming competition. Thanks Parramatta Park Trust!

The new playground is in the same spot as the old one, only about 50m from the George Street Gatehouse on O’Connell Street. And you can see the gatehouse through the trees.

The new playground is made mostly from beautiful wood and features play huts, which have shade on the ‘roof’. 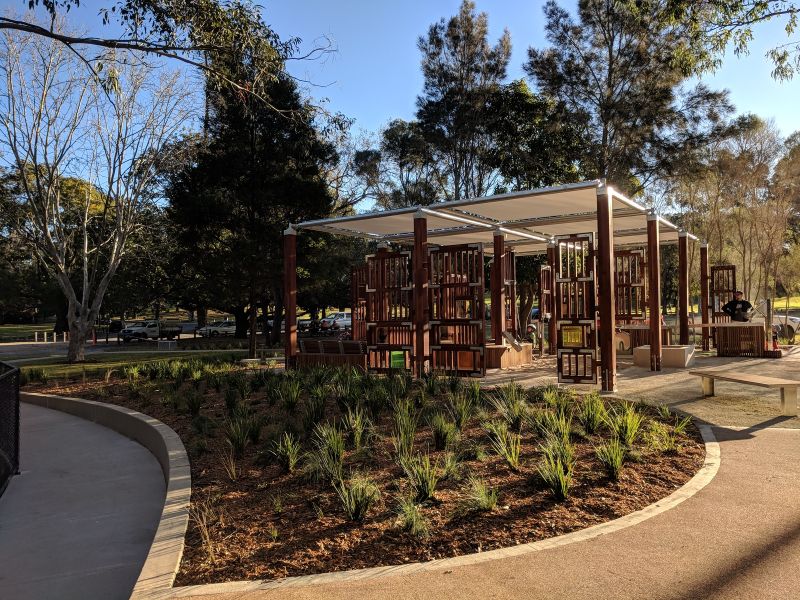 The main drawcard for my kids had been the scooter/ bike track around the outside, that we got included in the design. Though of the 10+ times we’ve visited since it opened, it’s been all sand and water play. And we can easily spend 2hrs there! 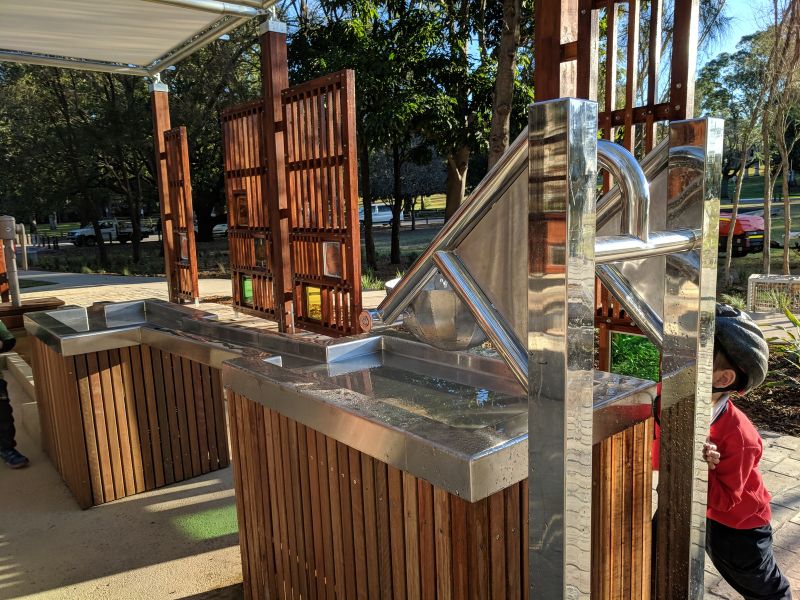 This would have to be one of our favourite sand and water play areas! And that’s saying a LOT seeing we’ve played at about 300 playgrounds now! 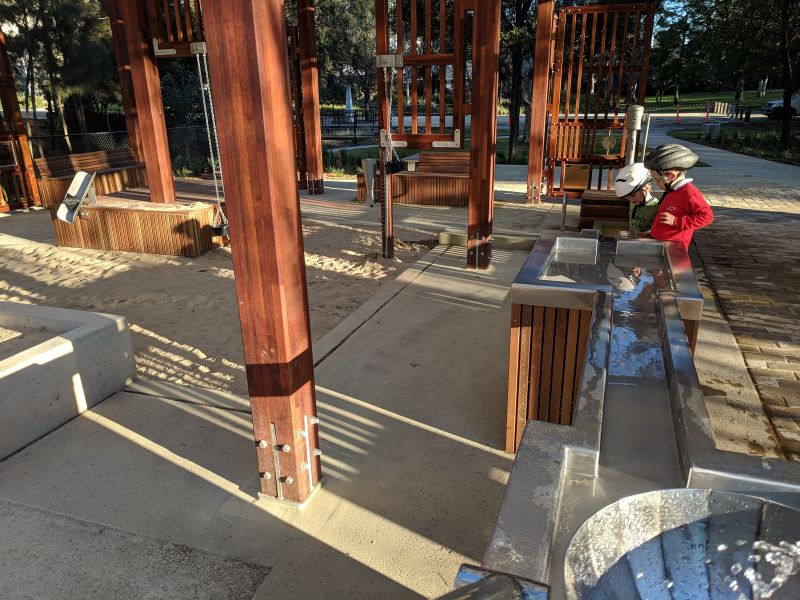 It’s of course popular during the warmer months. Though what child can resist water play at any time of the year! So my advice is to bring a change of clothes – we’ve definitely needed them each time we’ve visited.

When you arrive at the playground, it’s hard to miss the climbing dome in the middle.

I found it a little tricky to get to the upper level – yes I like to get in on the fun. But my kids easily manage it.

Next to the climbing dome is a merry-go-round, small slide, talking tubes and some musical instruments.

There are also some nature play elements with wooden logs to walk across and stepping stones. And the convict history of the site is carried through with in-lays in the wood. 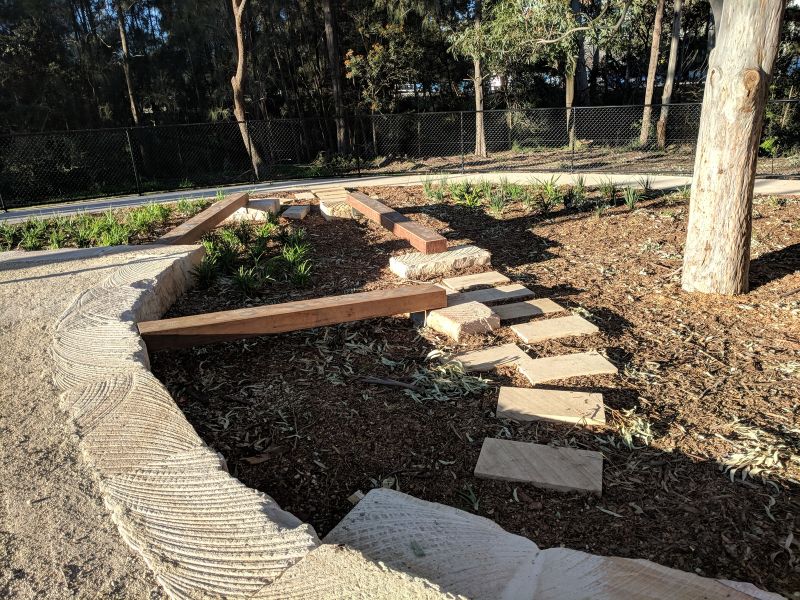 And last but not least, there are swings, including my favourite – a joey swing! Also known as a dual swing or mother and child swing. It let’s a parent or older sibling enjoy the swing while also swinging (and facing) your little one. Definitely saves your arms from pushing if your kids really love swings! 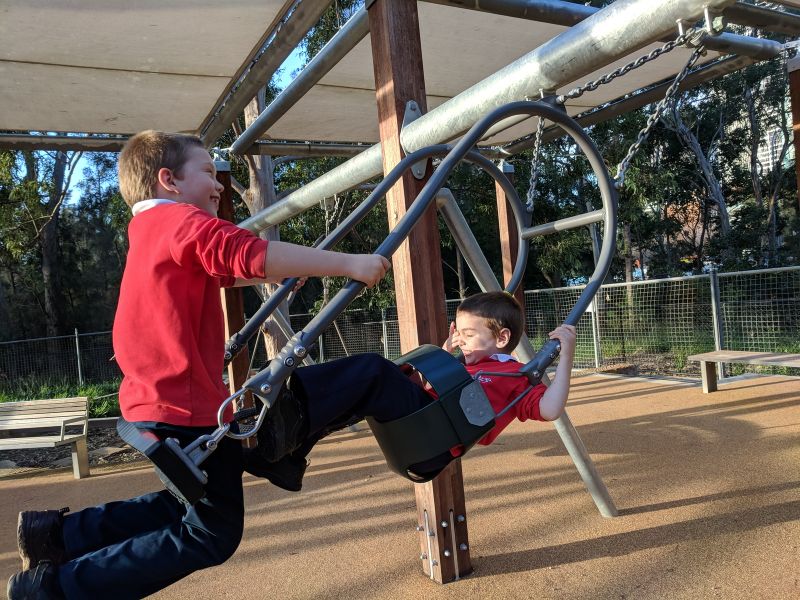 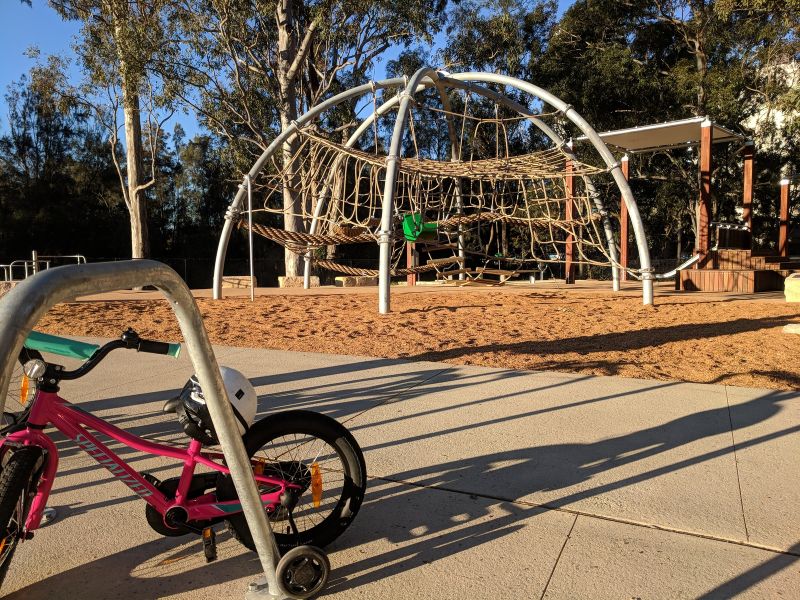 You will also see some of the convict history and natural environment of Parramatta Park has been incorporated into the playground. The wood huts actually mimic the size of the convict huts that had been built here. And there are love locks in the wood panels from actual convicts. Signage explaining the historical and archaeological significance of the site is still to be installed and will help tell the story of the playground.

There’s also a large grassed area in front of the playground, perfect for kicking a ball around. And it’s also where the annual Burramatta Festival is held to celebrate NAIDOC week in July. 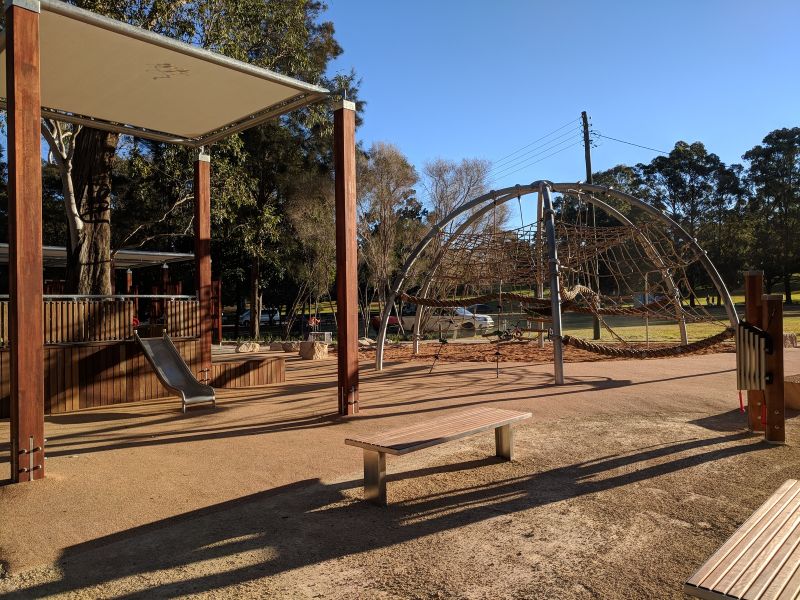 For a little bit of history, and to practise your balancing skills, take a look at the convict hut beams nearby. While there, read about Governor Phillip’s vision for an mile-long avenue to rival the grandeur of London’s Pall Mall. 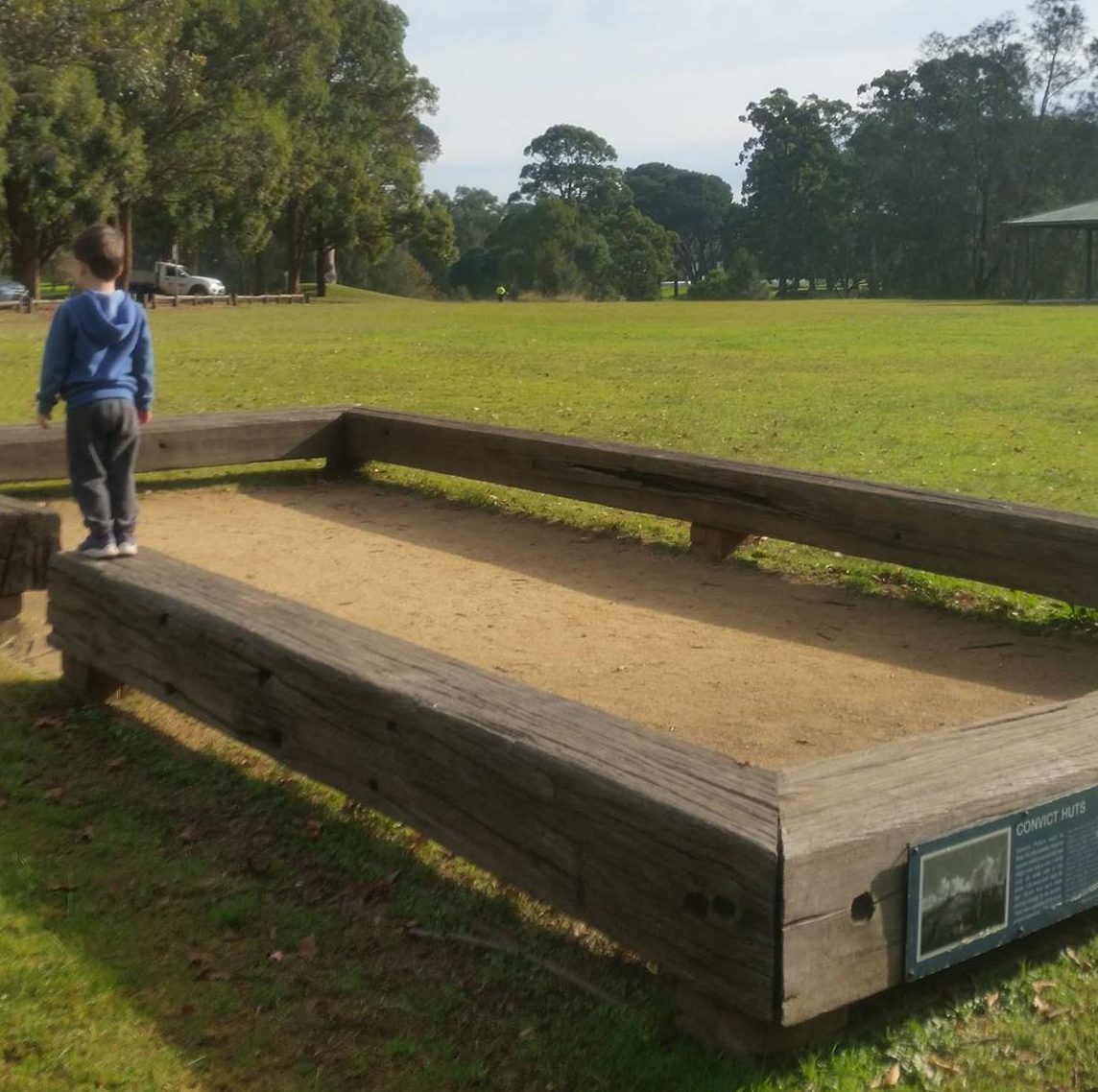 Plus, there’s a large picnic shelter near the playground that you can hire and lots of open grassed area. And a little walk away is Parramatta River.

There are only temporary toilets at the moment (portaloos) near the main park road in front of the playground. But a toilet block is currently being built and is set to open by December 2020. Plus, there are toilets at the George Street Gatehouse, where the Georgie Boy pop-up cafe is.

Parramatta Park Trust is still currently looking for a new cafe to lease the space at George Street Gatehouse. Currently Circa has a pop-up cafe there called Georgie Boy. NOTE: their opening hours are currently 8am to 2pm daily. 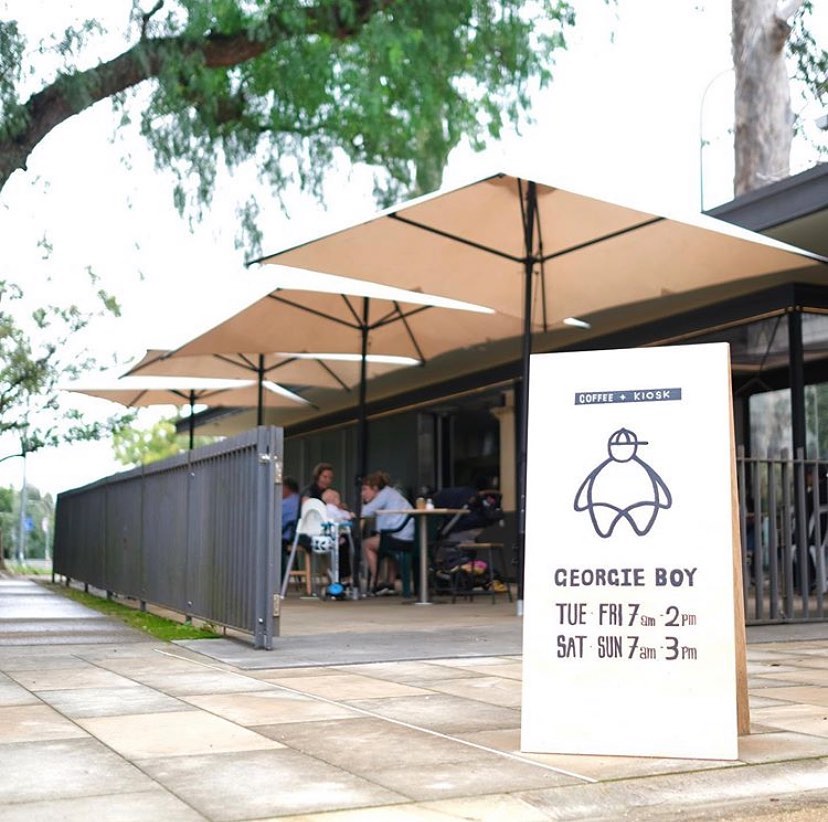 The new playground is near the George Street Gatehouse in Parramatta Park on O’Connell Street.

You’ll find limited timed parking in front and next to the playground in Parramatta Park. Unfortunately you’ve got to drive all the way around the park to get there and it fills up quickly. We’ve provided feedback to Parramatta Park Trust about extending the parking times from 1hr to 2hrs and 2hrs to 3hrs near the playground. Hopefully this will happen soon. There is also parking just near the Pitt Street entrance at the Rose Garden and it’s just a short walk down to the new playground from there. 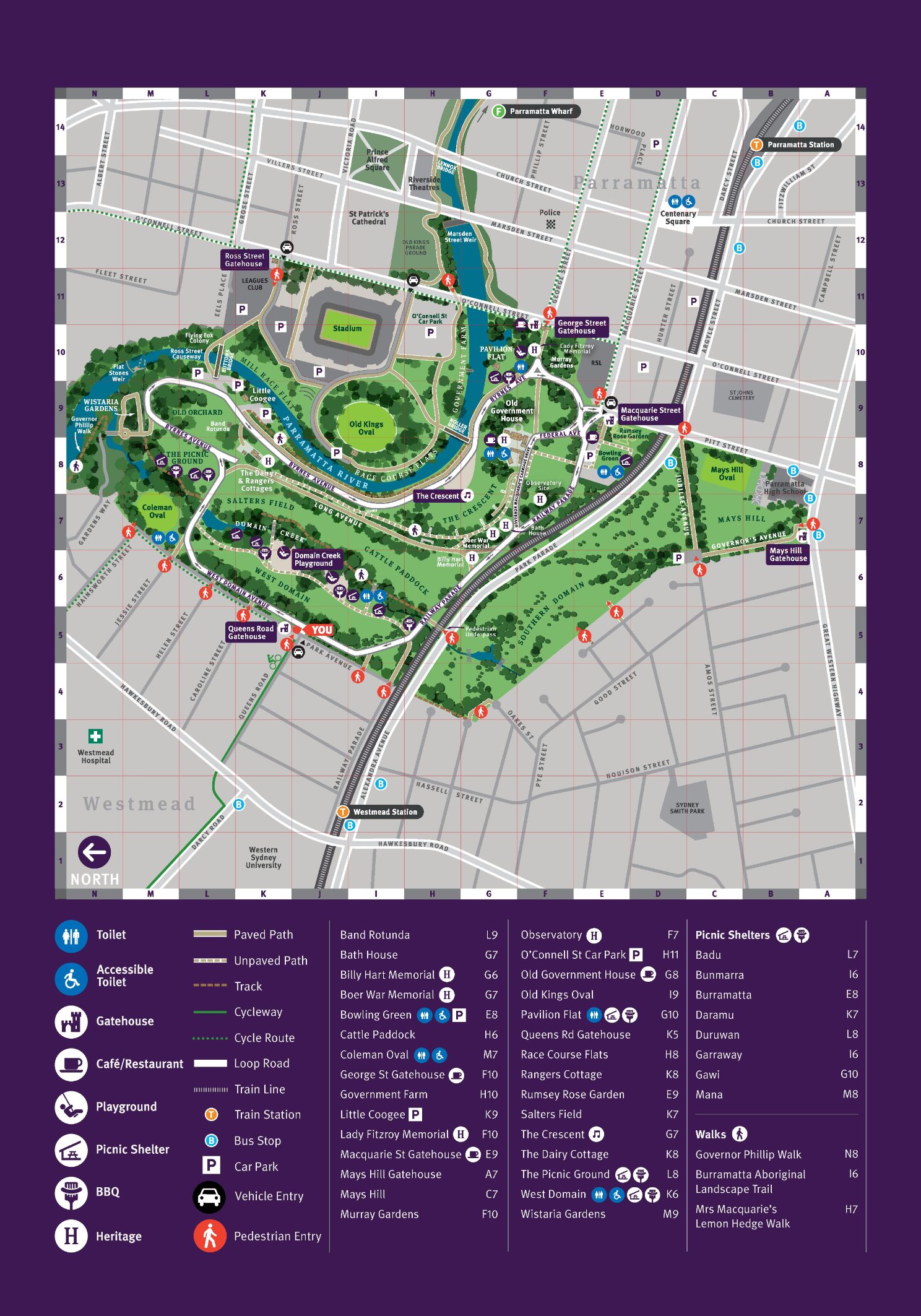 Paperbark Playground is also a shortish walk from the Parramatta Bus and Train interchange and along the route of the free shuttle bus.

What’s On In February For Families | Parramatta Region 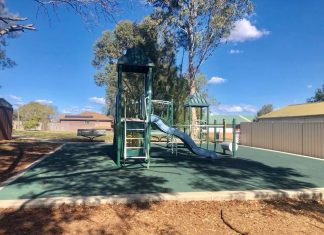