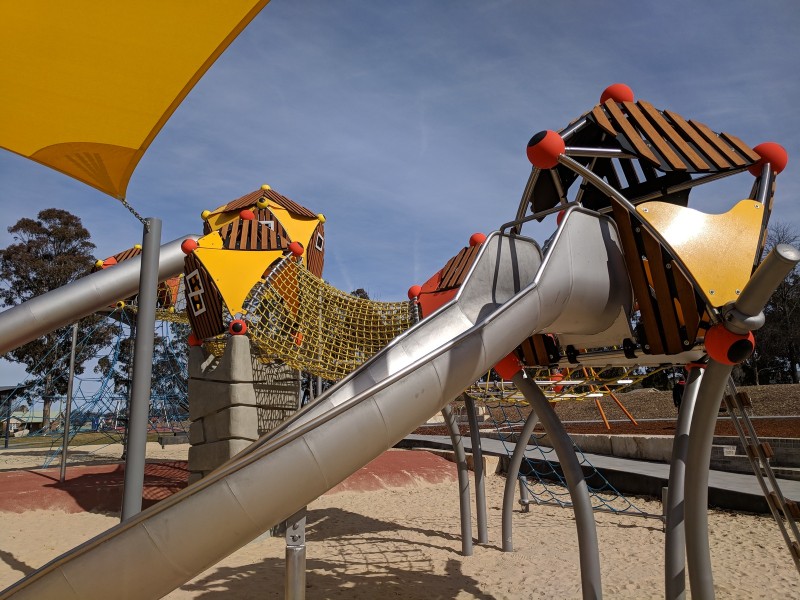 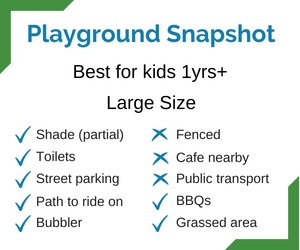 We took an impromptu trip recently to Canberra so my kids could have their first experience of snow. Now we need at least one play stop on the way to/ from Canberra. And normally visit Berrima for a play at the castle playground and lunch. But on the way back I thought we would check out the Big Merino, so googled playgrounds in Goulburn. Up popped the new adventure playground at Victoria Park. And what a WINNER!! Oh how I wish we had this playground just down the road! 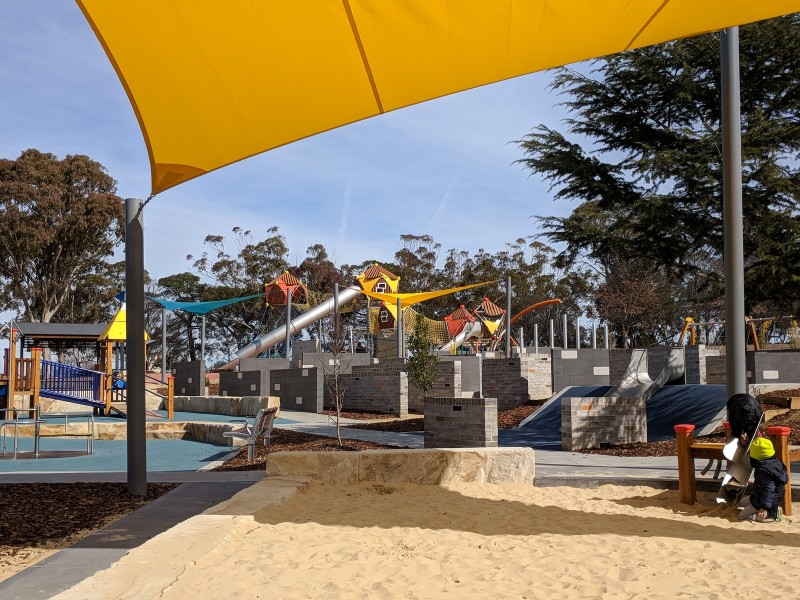 The adventure playground at Victoria Park opened in May 2018 and has fabulous, colourful play equipment for a range of ages. Plus there is a skate park and paths throughout the park to ride on.

It is sort of like Strathfield Park but slightly smaller and no where near as spread out…which makes it a LOT easier if you have more than one young child to keep an eye on. There are picnic shelters and BBQs around the playground so you can make it a lunch stop too. And thankfully there are toilets nearby and a bubbler as well. 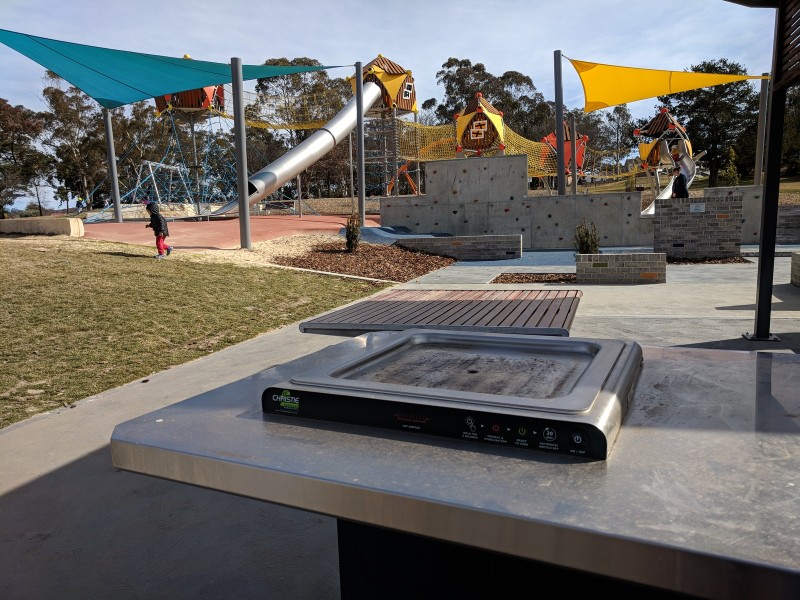 My favourite part of the playground is the musical maze.

There’s a section for little ones near the sand pit with a low level climbing play gym, merry-go-round and in-ground slide.

And a selection of different types of swing.

For adventurous climbers, there is the rope bridge and big slide to enjoy.

Now there are shade sails over the metal slides and sand pit – yay! And there are young trees that have been planted around the playground. But it will be hot in summer for a few years yet. 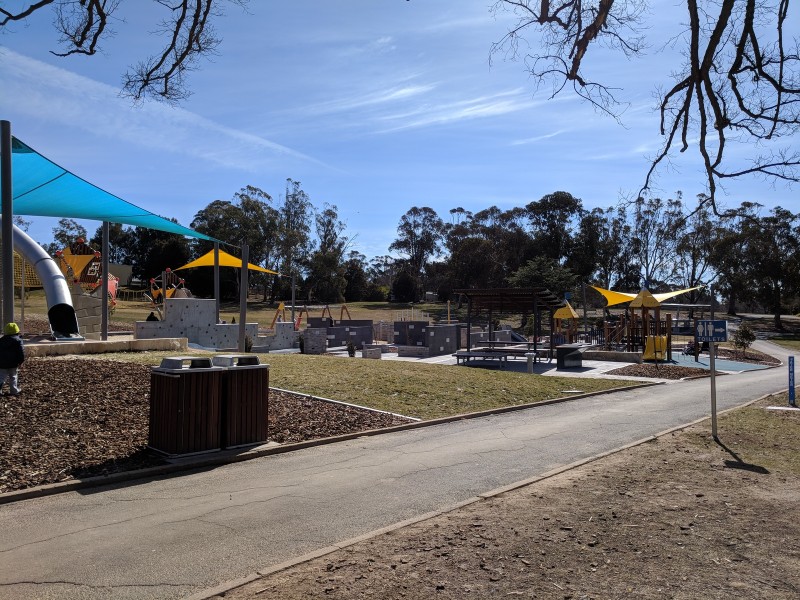 We were too busy playing at the playground to explore much further into Victoria Park, but had a quick look at the pond (with a gate). And could see another smaller playground (probably the one that was originally there) and skate park, plus sports field.

Looking at Google Maps, I noticed that there’s also Goulburn Aquatic and Leisure Centre in the park, next to the skate park. Well Victoria Park definitely has a LOT to offer to families in one location – well done Goulburn Mulwaree Council. Just a shame that there isn’t a cafe within walking distance (that we could find). 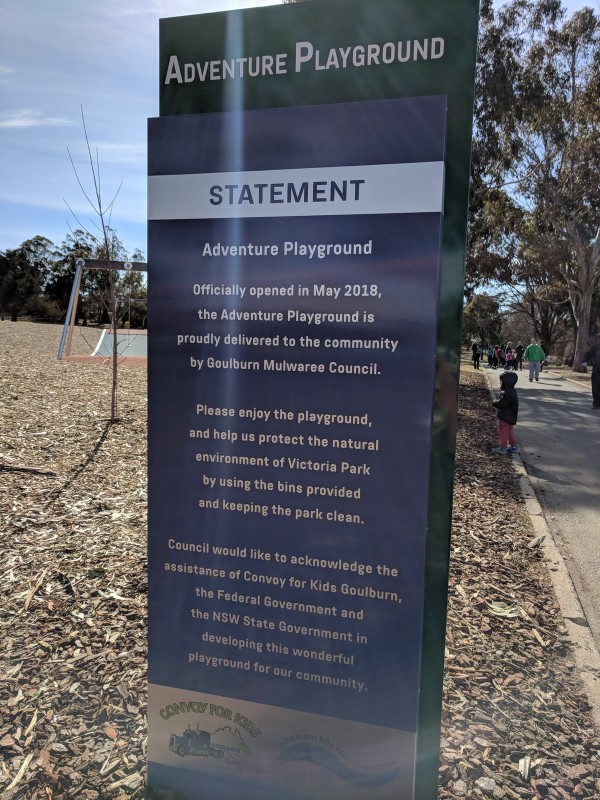 The adventure playground at Victoria Park is most directly accessed from Verner Street, where there is street parking. But it can also be accessed from Deccan Street. If you keep driving along Verner Street, you will reach the Goulburn train station. And there are a number of cafes along Sloane and Auburn Streets, just off Verner Street. 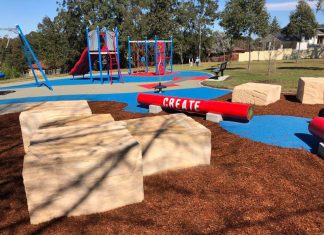