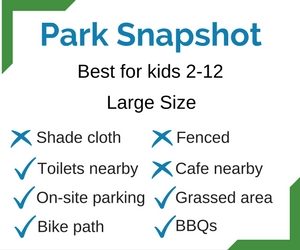 Blackman Park, along the Lane Cove River, is one of my family’s favourite parks. We love the bush setting, fabulous playground, being able to go on a little bush walk, the picnic facilities and easy parking. It would make for a great place to have a birthday party.

Like a LOT of the parks we go to around Sydney, I have Hello Sydney Kids to thank for this one.

Within a lovely bush setting, the playground at Blackman Park has a great variety of play equipment and caters for little and bigger kids.

My little boys love the digger (which you operate standing up – hooray), motor bike theme seesaw, swings and the large, ground level merry go round with seats.

Within the playground there is also a:

The playground is at the far end of the park, set way back from the street. The ground is a combination of wood chip and soft fall. There has been lots of natural shade when we have been but we are yet to go on a hot summer day.

Blackman Park offers a LOT of other things for families visiting the park, including:

The park also is a leash free exercise area for dogs – rules apply near sporting fields and playground.

In terms of recreational and sporting facilities, this large park has:

Blackman Park other facilities
1 of 8

The park is along Lane Cove River, opposite Sugarloaf Point and Buffalo Creek Reserve. It has its own road, Lloyd Rees Drive.

Blackman Park has gates which close at night. The park is open from 6am to 8.30pm Monday to Friday and 7am to 7pm Saturday, Sunday and public holidays. 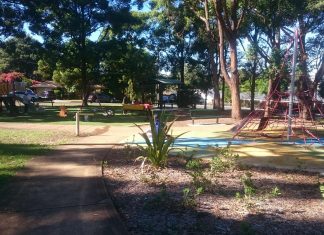