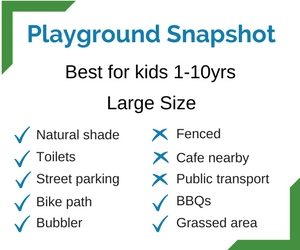 This 3.6 hectare park is quite literally a hidden gem. Most of the park is bordered by houses and the playground areas are tucked in behind the tennis courts and well away from the road.

Caber park has eight ‘play’ spaces that flow into each other, with something to entertain a large range of ages. It also makes for a great spot for family gatherings. A big bonus is that there are toilets and a walk/ cycle path that runs around the park, plus sheltered BBQs and picnic tables. There is plenty of natural shading which makes this park ideal on a warm day.

Here is a list of the different ‘play’ spaces at Caber Park.

There is a small fenced playground for toddlers next to the toilet block. It has a few pieces of low level play equipment and synthetic grass, great for crawlers, early walkers and toddlers.

Set amongst a large number of beautiful, tall gum trees, this is probably the second biggest space, after the open field and tennis courts.

The area for young kids is opposite the toilet block and has:

The small downside of being under all these glorious trees is that the sandpit is a mixture of sand, leaves, sticks and bark, and the slide is covered in bird droppings….doesn’t stop my boys though and thankfully it wasn’t fresh!

At the top of park you will find swings, a fun arch see saw and climbing tower for the older kids to enjoy.

The rebound wall and basketball semi circle are located between the top and lower playgrounds and should keep older kids entertained for a while.

There are two nets next to the tennis courts and one set picnic shelter with BBQs.

On the opposite side of the park to the playgrounds and tennis courts, there is an adult exercise station with four pieces of equipment.

There is plenty of room to kick a ball, fly a kite or go on a bush treasure hunt.

There are a number of tennis courts but we haven’t yet checked them out properly.

For such a large park, it feels funny that it is nestled amongst houses in Winston Hills. Most of the park isn’t visible from the street. And from the part that is, you would have no idea how much this park has to offer.  There is street parking and the nearest bus stop (606) is about 350m walk away. 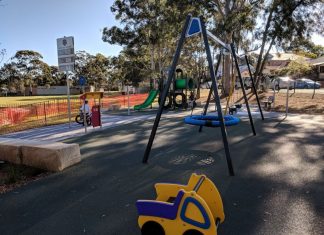