We have a bit of a water playground crush at the moment – well for the last few years! Just love the fact that as a family we can go down to a park and cool off – no floaties or payment required! So we couldn’t wait to try out the newest free water playground in Greater Sydney at Curry Reserve in Camden.

And it definitely delivered! We easily spent 3 hours there in early January on a hot day – and my two preschoolers would have been happy to stay longer. 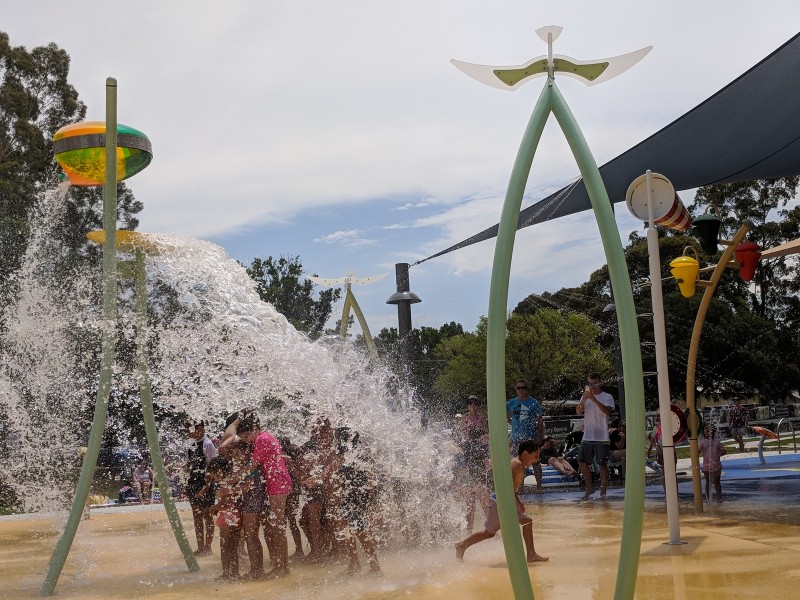 It was very busy when we first got there about 11am (though we still got a car spot) but was a lot quieter when we left at 2pm. 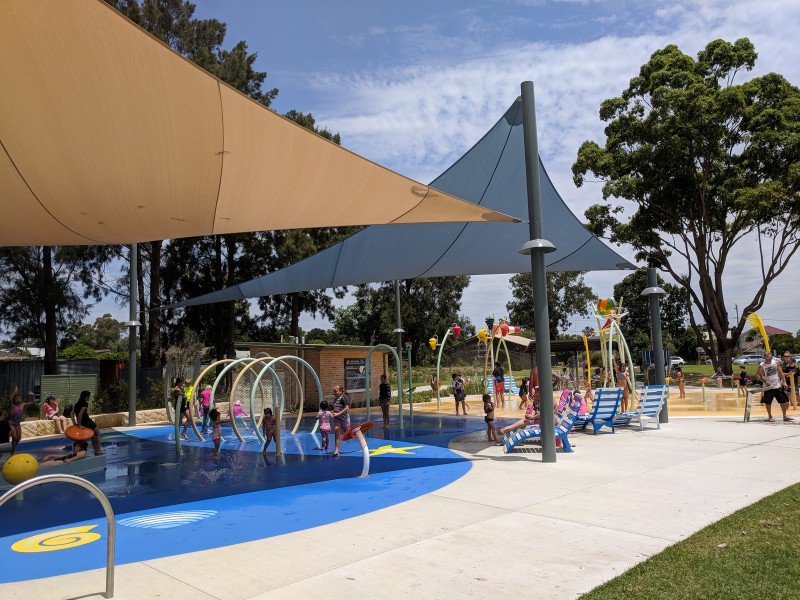 The water play space at Curry Reserve operates from 10am to 7pm, September to April. And there are some helpful and important tips on using it listed on a big sign at the water playground. 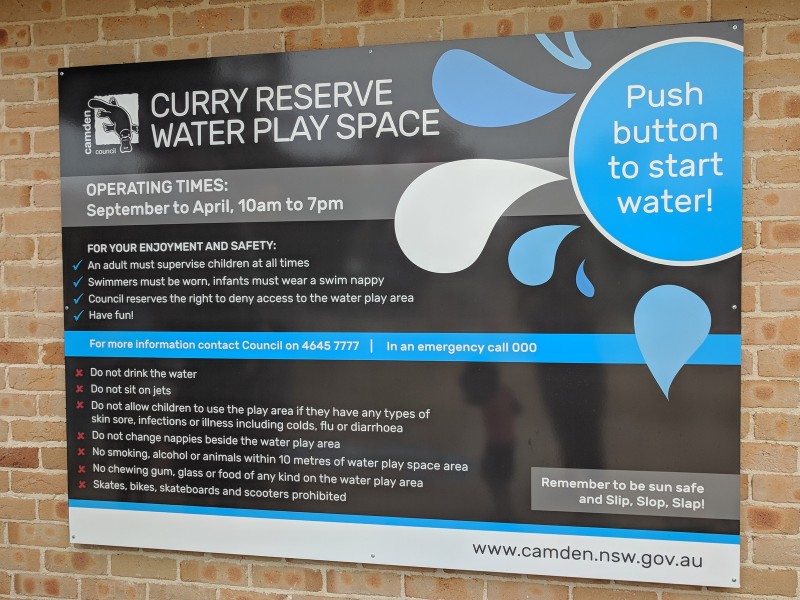 We had read that it was heated, but it didn’t feel it when we went. 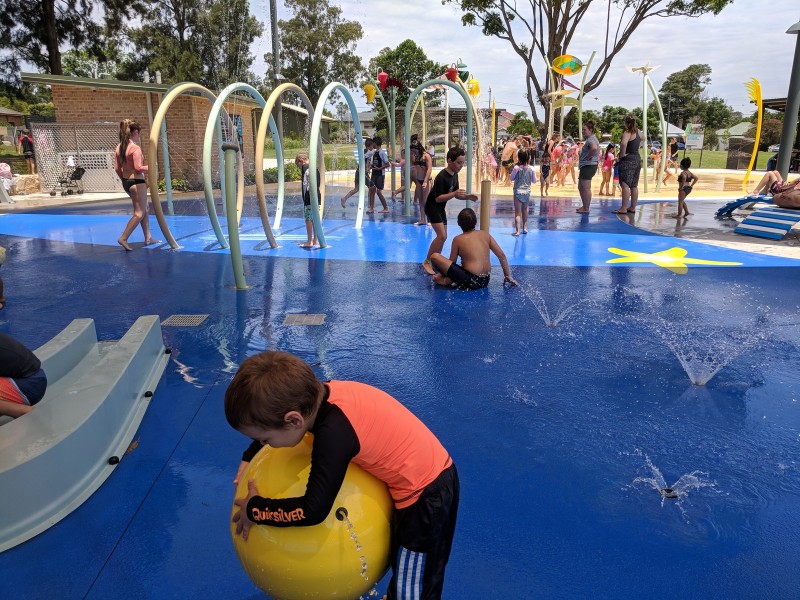 It took us about 50mins from Rydalmere to get there via the M7. We had planned to combine our visit with some strawberry picking but wasn’t able to this time around. And in the end, the water playground was enough of an outing on its own. But there are heaps of things to do a short drive from the water playground so you can make it a full day outing. 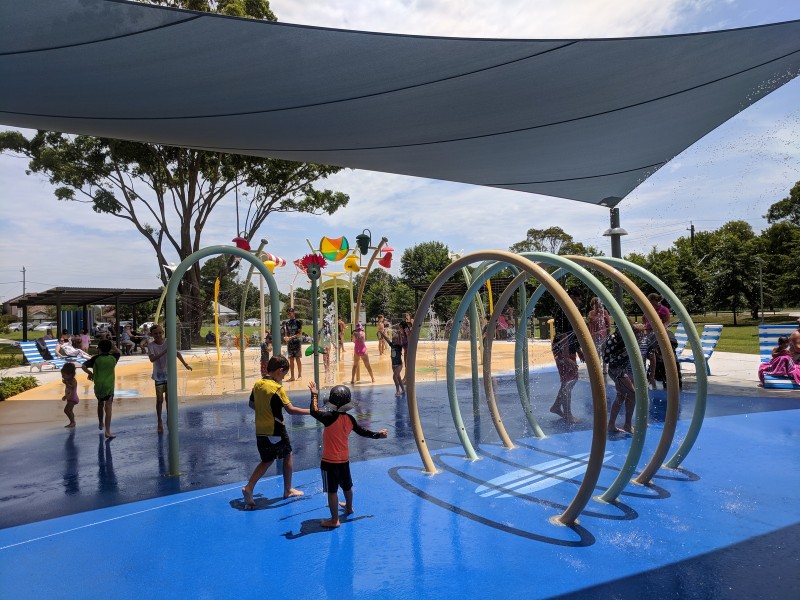 There’s an on-site carpark, probably with about 50-80 spaces (though I am terrible with estimating those sort of things). And you will notice a fenced area in front, plus a large covered BBQ area with picnic tables. The fenced area is for the new amenities building that will be built in autumn 2019. In the meantime, there’s still the old amenities block.

The water playground is set back from the road and has sandstone blocks around the outside on one side, which double as seats. On either end, there is a change room It’s the first time I’ve seen this at a water playground and I absolutely LOVED it. 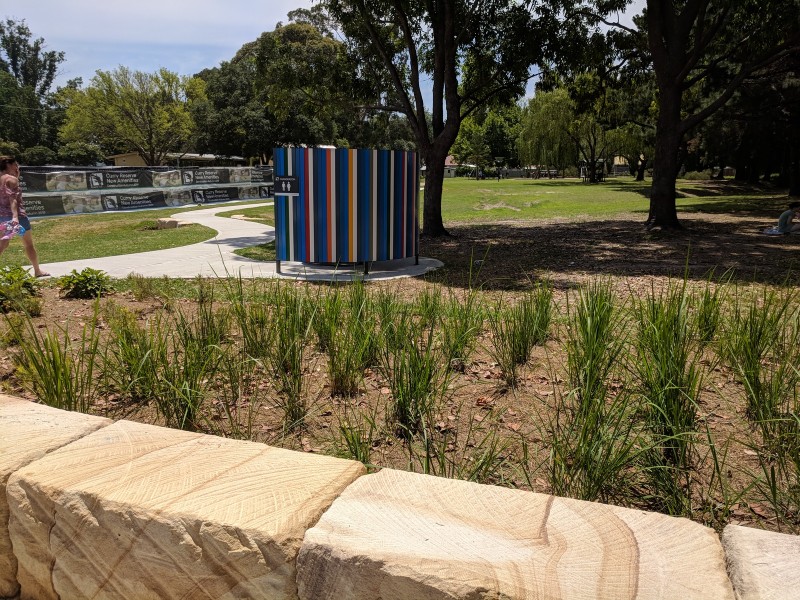 Half the water playground is shaded with shade sails. And there are also some large trees nearby that people were sitting under. 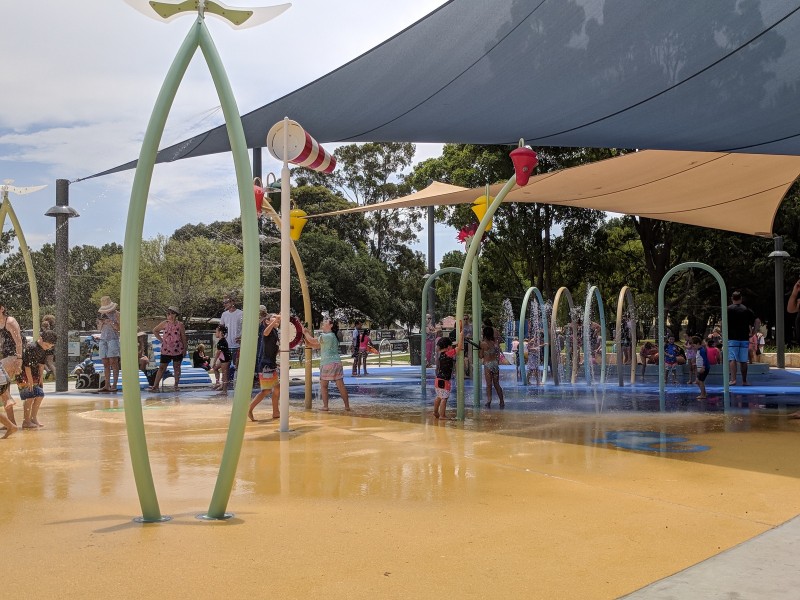 We loved the mix of water play fountains, tipping buckets and splash areas. 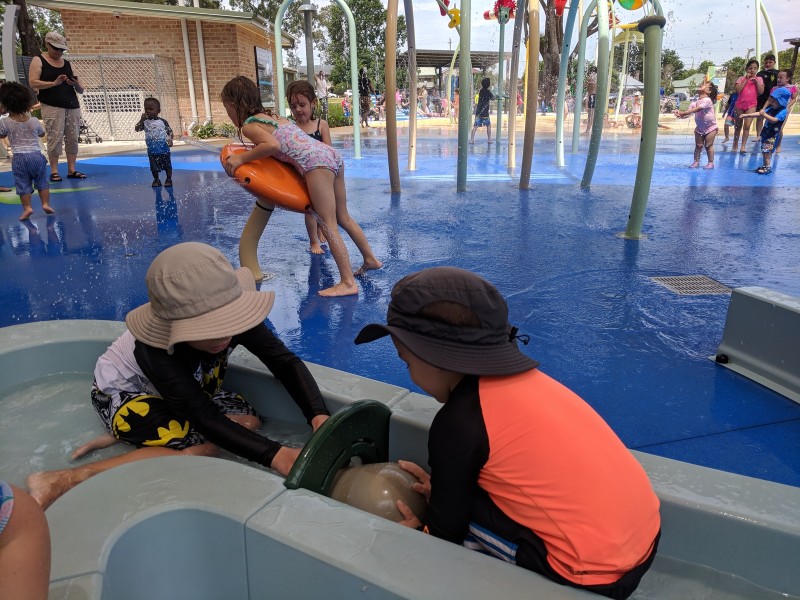 Something that we haven’t seen before at a water playground is the splash channel. It’s great for little ones, and encourages a lot of social interaction (aka potential for arguments). 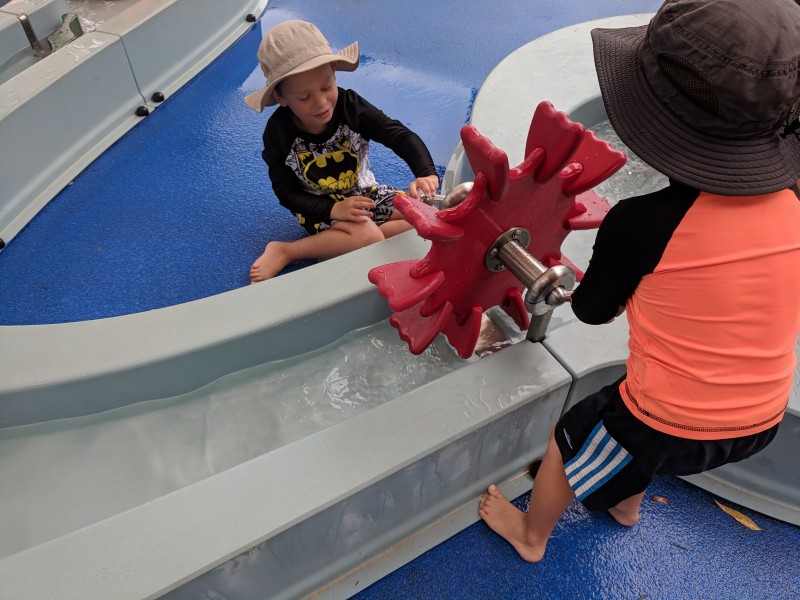 The main feature though is the big tipping bucket which probably pours every 5mins, much to the delight of the kids standing underneath.

Nearly everything spins and there are some fun water guns that my boys particularly liked. Though be warned one of the three works far better than the others! 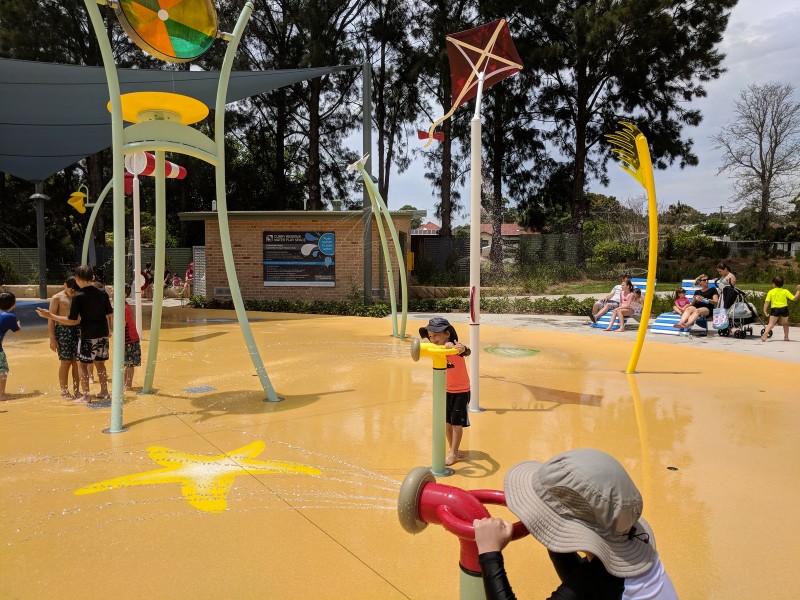 Next to the water playground are two picnic shelters with two picnic tables under each. 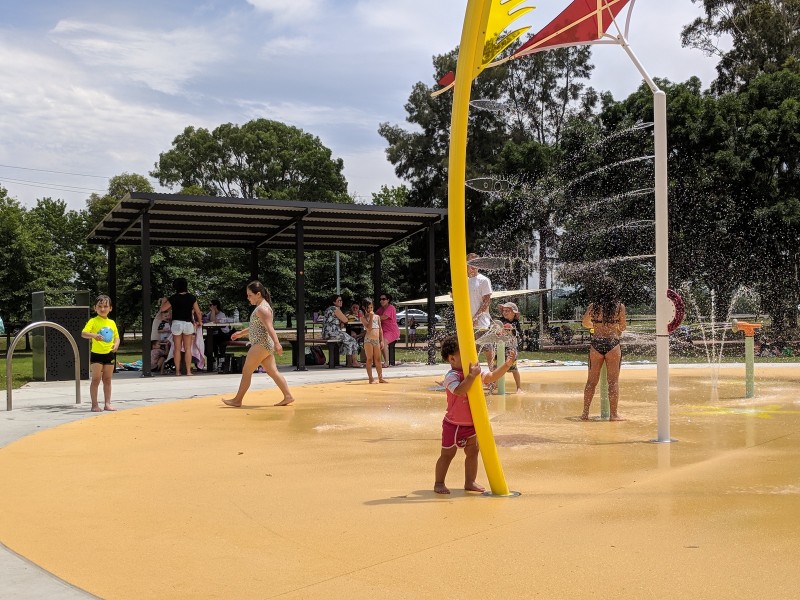 Plus there are a few ‘beach lounge’ chairs that you can sit on, or the sandstone wall. 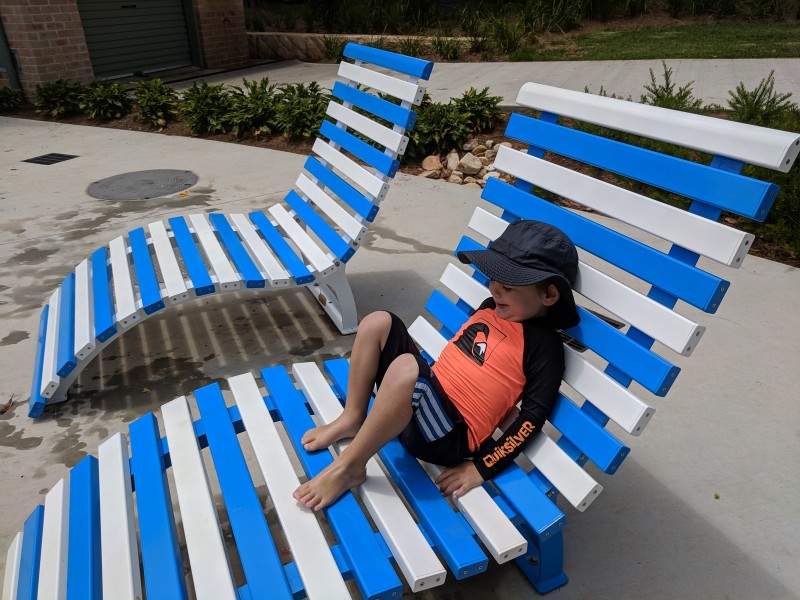 And another unique feature are the showers for washing off afterwards. 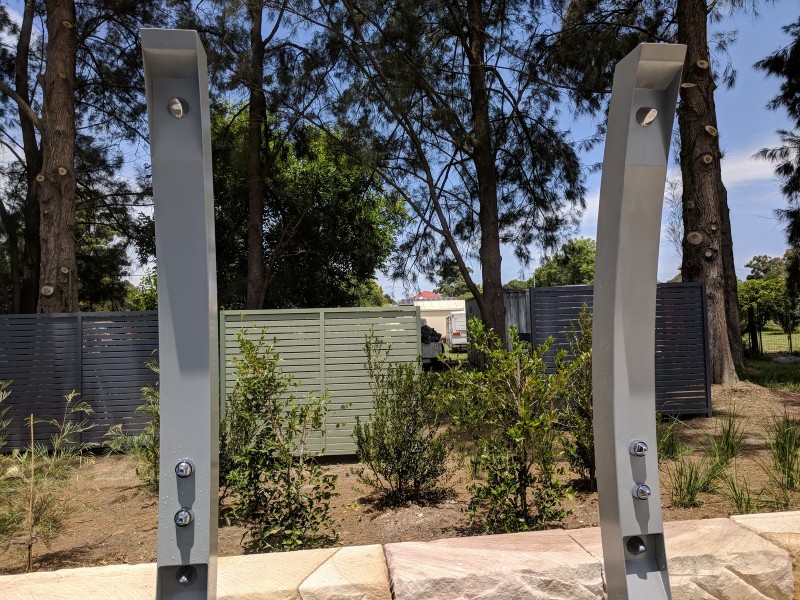 My only complaint would be that there should be more shade for parents while we watch our kids and to sit under for a picnic. Unfortunately the shade sails are about a metre short from covering the seating around the outside. 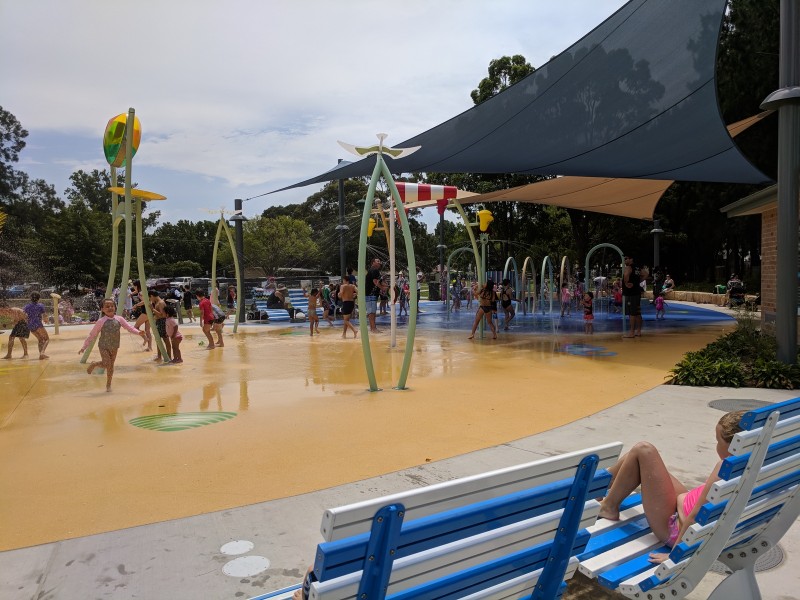 And once you have had a enough of being wet, there is a ‘dry’ playground about 50m away. It’s just past the toilets and near the Camden Information Centre. 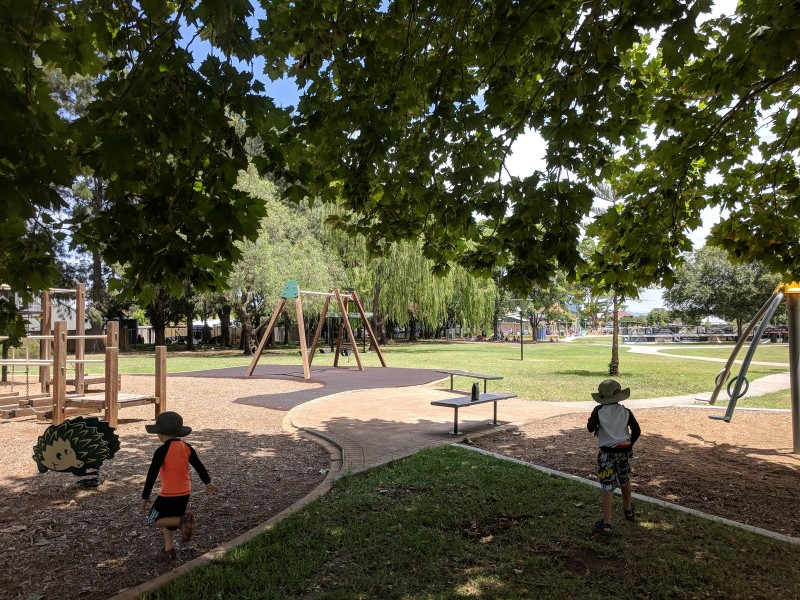 It was lovely sitting here under the big tree while my boys warmed up a bit playing.

And we all really enjoyed the seat merry-go-round. 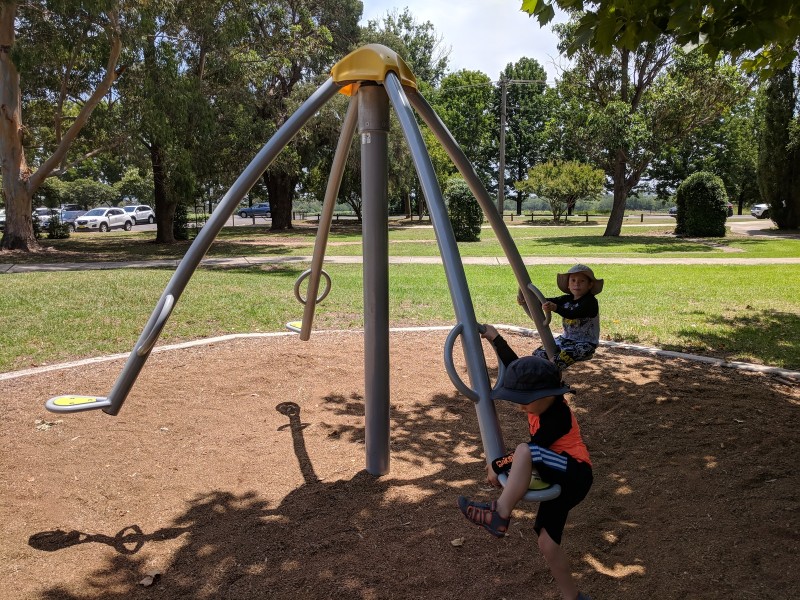 If you keep walking north, you will come to the Camden Visitor Information Centre. 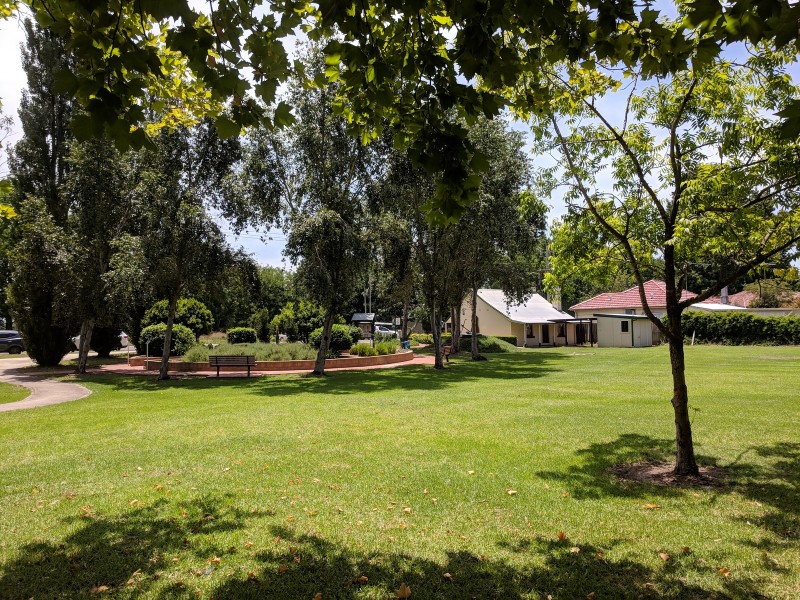 There is a water refill station along the path here, plus the toilets and the BBQ area that we mentioned before. 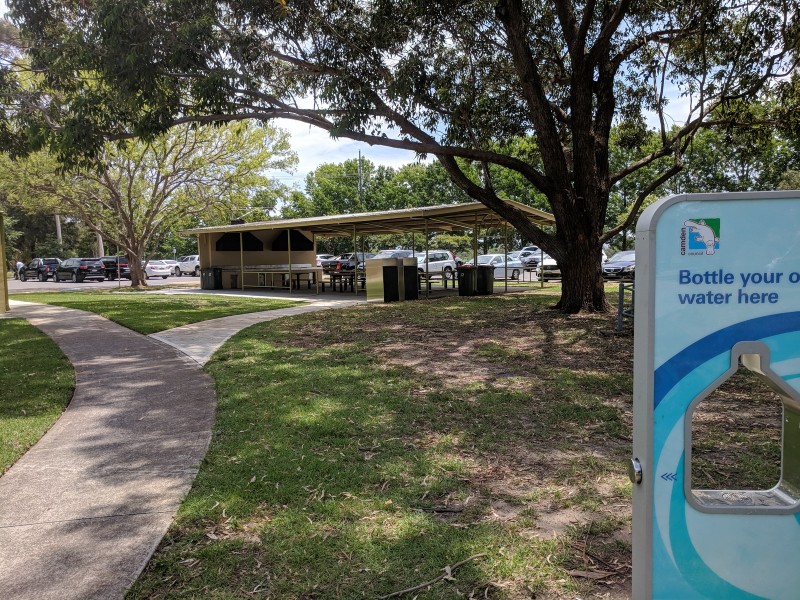 For little riders, the path through the park would be good for scooters or bikes.

About 50kms south west of Parramatta is Curry Reserve in Elderslie, Camden. It’s not too far from Narellan Town Centre and the Australian Botanic Garden. There is on-site parking accessed from Camden Valley Way, just after the Information Centre. Or street parking along Wilkinson Street. 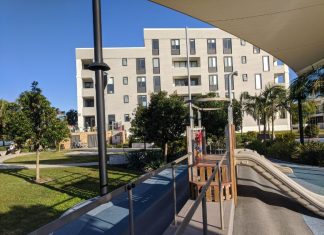